SEOUL, Oct. 6 (Yonhap) -- First Vice Foreign Minister Choi Jong-kun called Wednesday for the two Koreas to work together to build a "future order of peace" on the Korean Peninsula, starting with the proposed declaration of a formal end to the 1950-53 Korean War.

President Moon Jae-in again proposed the declaration during the U.N. General Assembly last month, in an effort to bring North Korea back to dialogue and revive his stalled drive for peace.

"The share of the task to build step by step a future order of peace on the Korean Peninsula, starting with this declaration, lies on both South and North Korea," Choi said during a forum marking the three years since the Pyongyang summit between Moon and North Korean leader Kim Jong-un. 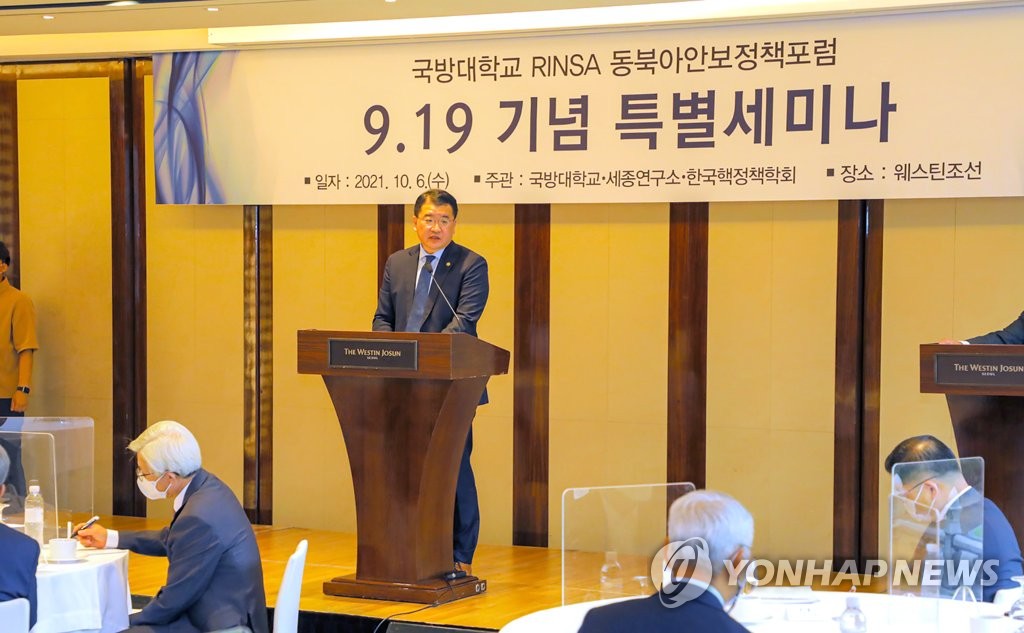 Choi's remarks came amid lingering skepticism over the proposed end-of-war declaration in the wake of a series of Pyongyang's missile launches, including the test of a new hypersonic missile last month.

Even after the political declaration, the two Koreas should retain and enhance their 2018 military agreement aimed at reducing border tensions and accidental clashes, so as to stably maintain what could be a long process for permanent peace on the peninsula, the vice minister said.

The Comprehensive Military Agreement (CMA) entails a series of conventional arms control measures, such as withdrawing some border guard posts, disarming the Joint Security Area in the Demilitarized Zone, and setting up air, ground and maritime buffer zones.

The CMA also calls for the operation of a joint inter-Korean military committee tasked with enforcing and fleshing out the agreement.

Choi, a key architect of the CMA, stressed the need for the North to come and join the joint committee immediately.

"Even if the joint military committee comes into operation, it would not settle all issues, and a new agreement would emerge soon," Choi said.

"But what needs to be done now is to start dialogue by bringing up all things that each side wants to ask and can answer," he added.

Choi also sought to dispel criticism about the CMA, stressing that the agreement offers an "essential environment" for denuclearization efforts with the North often hampered by cross-border tensions.

"We should thoroughly forestall the possibility of an accidental clash between South and North Korea escalating out of hand and causing denuclearization negotiations to run aground," Choi said.