SEOUL, Oct. 6 (Yonhap) -- Gyeonggi Province Gov. Lee Jae-myung, the front-runner in the presidential primary of the ruling Democratic Party (DP), is expected to resign from his governorship late this month to focus on campaigning for next year's presidential election if nominated as the party candidate.

According to sources, Lee's team has determined that it would be best for Lee to step down as soon as the parliamentary audit wraps up later this month or no later than Nov. 5, when the main opposition People Power Party (PPP) is scheduled to announce its presidential candidate, in order to have the upper hand in the general race.

A team official said there have been internal discussions that "it will be desirable (for Lee) to step down after finishing the parliamentary audit," hinting that the governor could potentially resign after the end of the regular three-week audit on Oct. 21.

"As far as I known, (Lee) will go through the parliamentary audit as previously scheduled," Rep. Park Ju-min, the chief strategy manager for Lee's campaign team, said in a briefing.

The timing of Lee's resignation as the governor of the populous province surrounding Seoul remains a topic of speculation and opposition criticism.

Not only the PPP but Lee's rivals within the DP have also accused him of using his position to campaign for his presidential bid, especially after the provincial government decided last month to distribute COVID-19 relief funds to the region's high income earners who were excluded in a national pandemic handout program.

Under the Public Official Election Act, Lee must give up his governorship by Dec. 9, or 90 days before the March 9 presidential election.

Lee's governorship will likely come under parliamentary scrutiny, with two committees set to vet the municipality in two separate sessions on Oct. 18 and 20, respectively. A growing corruption scandal linked to a controversial land development project in Seongnam, south of Seoul, launched in 2015, when Lee was the city's mayor, is expected to become a hot button topic. 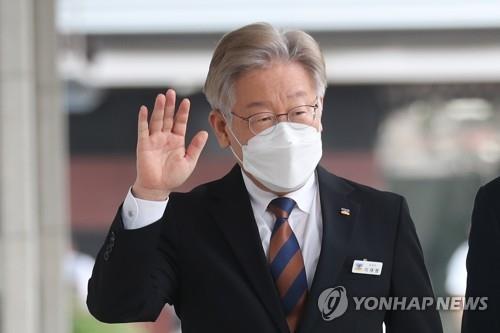