In the run-up to the vote, news reports claimed Park was involved in the National Intelligence Service (NIS)'s surveillance of environmentalists who campaigned against a major river restoration project in 2009, when he was the public relations chief for then President Lee Myung-bak.

An NIS report submitted later to a ruling party lawmaker suggested that Park was briefed by the spy agency on its inspection of the activists and measures to fend off their movement.

The Busan District Prosecutors Office indicted Park on charges of violating the election law, wrapping up its investigation prompted by a complaint filed by the ruling Democratic Party (DP) in July.

The prosecution in the southeastern port city did not charge the professor-turned-politician on other suspicions raised by his opponents in connection with his properties and his daughter's university admission. 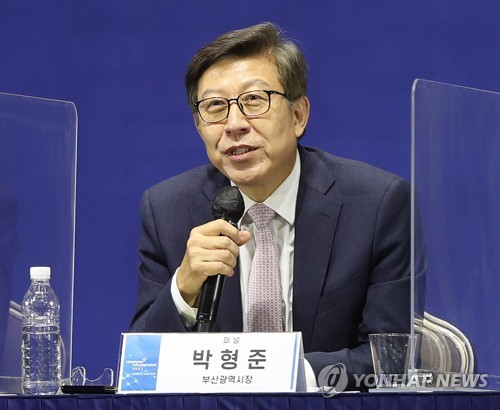 Park continued to deny his involvement in the NIS surveillance and slammed what he called a politically motivated investigation.

The DP demanded the mayor apologize and resign.

Seoul Mayor Oh Se-hoon is also under investigation on charges of spreading false information during the by-election campaign about a scandal-plagued urban development project and his participation in right-wing street rallies.

Oh, affiliated with the conservative PPP, was questioned by the Seoul Central District Prosecutors Office on Saturday.

Park and Oh took office in April after scoring landslide victories against their DP rivals in the by-elections. Their terms end in June 2022.
(END)