SEOUL, Oct. 6 (Yonhap) -- Prosecutors on Wednesday dropped charges against Seoul Mayor Oh Se-hoon over allegations that he spread false information during TV debates in the run-up to the Seoul mayoral by-election in April.

Oh was investigated on charges of, among other things, spreading false information after he said during the pre-election debates that a scandal-plagued development project in 2009 had nothing to do with his previous term as Seoul mayor from 2006 to 2011. He has claimed he forgot about the case because the project ultimately fell through.

"Even if his comments during the debates were not true, the acts do not constitute to spreading falsehood under the Public Official Election Act if they were made to refute allegations against him," the team at the Seoul Central District Prosecutors Office that handled the case said, noting that Oh did not seem to intentionally say anything false. 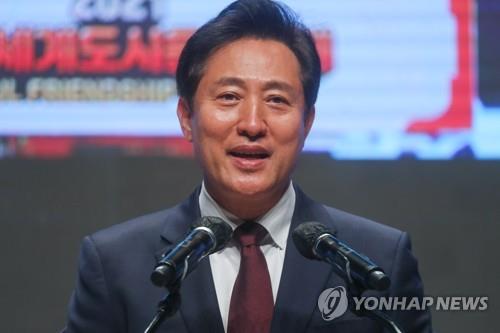