SEOUL, Oct. 6 (Yonhap) -- Finance Minister Hong Nam-ki said Wednesday the government will impose a tax on gains from virtual assets, such as cryptocurrencies, next year as planned.

Hong reiterated the stance, adding necessary infrastructure is in place and delaying the taxation plan further could hurt the reliability of government policy.

"It appears to be difficult to readjust or delay taxation on virtual assets, considering legal stability or policy reliability," Hong told lawmakers during a parliamentary audit.

Asked if the taxation on virtual assets could start from next year as planned, he said, "Yes."

The top economic policymaker said taxation can be possible for virtual assets traded with real names and through exchanges.

The government earlier sought to impose a 20 percent tax on capital gains from cyber assets starting in October last year, but it was delayed in the process of parliamentary review.

It currently plans to introduce the tax next year amid investors' calls for delaying the plan further. 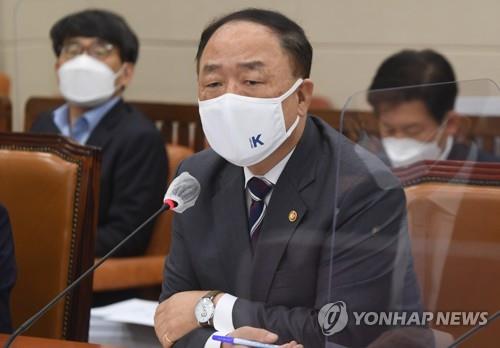