SEOUL, Oct. 6 (Yonhap) -- Foreign Minister Chung Eui-yong held back-to-back talks with his counterparts from France, Hungary and Luxembourg on Wednesday to discuss bilateral ties and other issues on the margins of a gathering of the Organization for Economic Cooperation and Development (OECD), his office said.

Chung was in Paris to attend the Meeting of the OECD Council at Ministerial Level, which opened Tuesday under the main theme of "Shared Values: Building a Green and Inclusive Future." South Korea and Luxembourg were vice chairs of the meeting this year, with the U.S. being the chair.

During their meeting, Chung and his French counterpart, Jean-Yves Le Drian, agreed to strengthen cooperation in preventing and responding to infectious diseases down the road, the foreign ministry said.

The two sides also agreed to continue reinforcing cooperation in political, economic and other areas based on shared principles and values of multilateralism, free trade and democracy.

Chung used the session to ask for France's continued support for South Korea's efforts for denuclearization and lasting peace on the Korean Peninsula, as the European country is a permanent member of the U.N. Security Council. 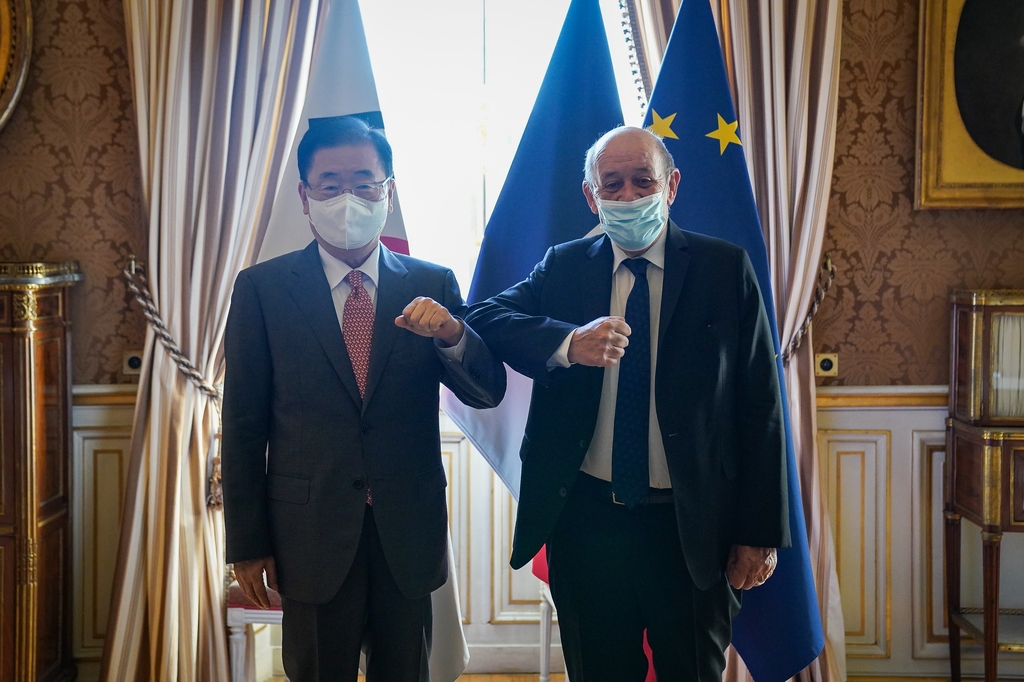 Chung called on Hungary to help South Korea enhance cooperation with the Visegrad Group, which Hungary chairs until June next year.

On the same day, Chung also met with Luxembourg's top diplomat, Jean Asselborn, to discuss bilateral cooperation, particularly about ways to further develop relations between the two countries as next year marks the 60th anniversary of the establishment of diplomatic ties.

The two ministers agreed to closely cooperate to deepen bilateral relations in the economy, culture and other areas, and revitalize people-to-people exchanges, according to the ministry.