South Korean actors Lee Jung-jae, Park Hae-soo, Jung Ho-yeon and Wi Ha-joon, who played three main contestants and a police detective, respectively, in the mysterious survival games of the Korean drama-horror series, were connected from Seoul to film the interview the previous day.

"Squid Game" is a nine-episode series that revolves around hundreds of debt-ridden people taking part in a series of deadly Korean children's playground games to win 45.6 billion won (US$38.5 million) in prize money.

After congratulating them on the drama's rise to the top of Netflix's most-viewed releases in 90 countries around the world, Jimmy Fallon asked Park when he realized the show had become so big.

"Right now," he answered without hesitation, drawing laughter from the others. "I'm so thankful because I'm realizing this through so many media outlets, but I feel it even more at this very moment. I feel it in my bones," said the actor who played Cho Sang-woo, one of the contestants. Cho is the main character Seong Gi-hun (Lee Jung-jae)'s childhood friend who is wanted for mishandling his clients' funds. 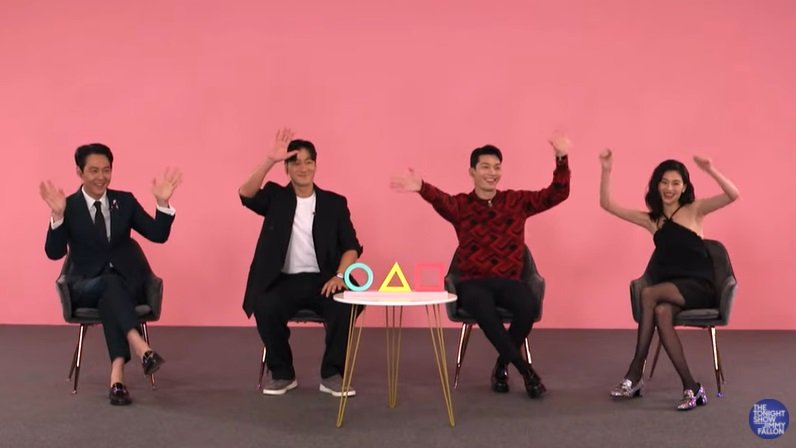 When asked about elements behind the drama's success, Wi singled out the Korean children's games that underpin the deadly competitions.

"I definitely think part of the appeal is the Korean children's games. That can be very original, refreshing and also shocking at the same time to the global viewers," he said. "I also feel like we did a good job expressing the human greed and the true human nature exposed through the games."

Lee said the scene in which his character Gi-hun runs into Kang Sae-byeok (Jung Ho-yeon) was the most memorable.

"I bump into her and actually make her drop her coffee. Typically you would just pick it up and hand it to her, but I noticed the straw on the ground. So I improvised and tried to stick the straw back into the cup. I tried to do it multiple times. That made Ho-yeon crack up so hard that she couldn't lift her head up."

Questioned about the giant robot doll that oversees a Korean version of the "red light, green light" game in the drama, Jung explained it is Young-hee, a character from Korean school textbooks.

Jimmy Fallon also congratulated Park on the recent birth of his baby boy.

"It was quite amazing because the premiere of 'Squid Game' was at 4 p.m. (Korean time), and the first time I got to meet my son was at 3:50 p.m. So he is my lucky charm and a bundle of blessing for me," Park said. "My friends and many people around me call him 'Baby Squid'." 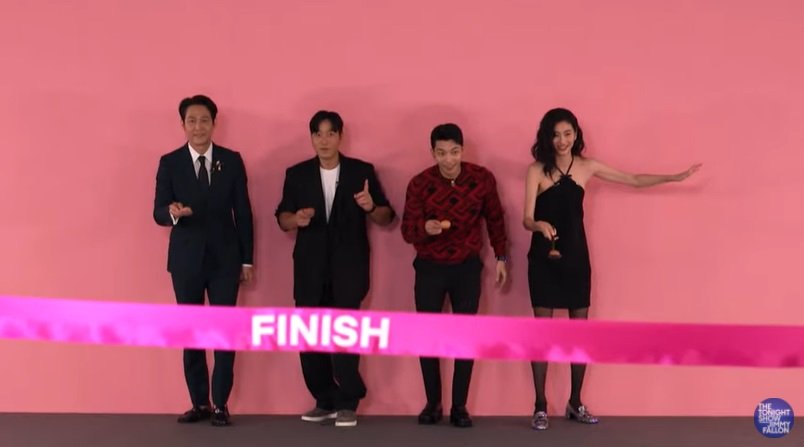