(ATTN: UPDATES with additional remarks regarding U.S. sanctions on Iran in last 5 paras)
By Byun Duk-kun

WASHINGTON, Oct. 7 (Yonhap) -- The United States supports efforts to alleviate the suffering of North Korean people and is engaged in efforts to provide humanitarian assistance to such people in the reclusive North, a State Department spokesman said Thursday.

Ned Price also noted the U.S. would support humanitarian assistance for the North even if its efforts to denuclearize the country do not move forward.

"Even when we disagree with a particular regime, we believe that we must work to the best of our ability to do all we can to alleviate the suffering of the people," he said when asked about the U.S. position on the recent shipments of COVID-19 medical supplies to North Korea.

The World Health Organization said on Thursday (Seoul time) that it has begun sending such supplies to the North.

"And so we continue to support international efforts aimed at the provision of critical humanitarian aid to the DPRK," Price added, referring to North Korea by its official name, the Democratic People's Republic of Korea. 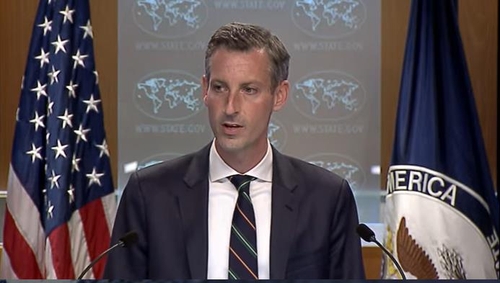 The department spokesman, however, emphasized that the North Korean regime itself was largely to blame for the suffering of its own people.

"The regime continues to exploit its own citizens, to violate their human rights, to divert resources from the country's people to build up its unlawful WMD (weapons of mass destruction) and ballistic missiles program," he said.

Still, the United States is involved in efforts to facilitate and also expedite the provision of humanitarian assistance to the North Korean people, Price noted.

"We are involved in efforts to facilitate the provision of humanitarian aid to the neediest in North Korea. This is most evident, I would say, in our ongoing work to expedite approvals in the U.N. 1718 committee for organizations from around the world to deliver life saving aid to the DPRK," he said, referring to a U.N. sanctions regime that prohibits shipments of sensitive items to and from the North.

Pyongyang has ignored numerous overtures made by the Biden administration that came into office in January, while also staying away from denuclearization negotiations with the U.S. since early 2019.

"Our goal remains the complete denuclearization of Korean peninsula, and to that end, we remain prepared to meet with the DPRK without preconditions, anytime, anywhere," he said, urging North Korea to "respond positively to our outreach."

North Korea had kept its border closed since the start of the COVID-19 pandemic early last year, with many people saying an outbreak would have been especially devastating in the country that lacks even the most basic medical supplies and equipment.

Meanwhile, the State Department spokesman praised Seoul for its efforts to help bring Iran back to a multinational nuclear deal, known as the Joint Comprehensive Plan of Action (JCPOA), commenting on a recent discussion between U.S. special representative for Iran, Robert Malley, and South Korean Vice Foreign Minister Choi Jong-kun.

"The ROK has been a stalwart partner. The ROK and we see eye to eye when it comes to the utility of mutual return compliance with the JCPOA," said Price, referring to South Korea by its official name, the Republic of Korea.

Seoul currently holds about US$7 billion in Iranian funds frozen at South Korean banks under U.S. sanctions. The U.S. had signed a waiver in March to allow the use of the Iranian funds to pay off debts owed to South Korean and Japanese businesses, but maintains the rest of the funds must remain frozen until the Middle Eastern country returns to compliance with the nuclear deal.

"We appreciate the ROK's vigorous enforcement of existing sanctions. Those sanctions do remain in effect as you know until and unless we are able to reach that mutual return to compliance," he added.

The U.S. withdrew itself from the JCPOA in 2018 under former President Donald Trump, soon prompting Iran's departure from the nuclear deal that was signed in 2015.