SEOUL, Oct. 8 (Yonhap) -- Not all victories are created equal in football.

South Korea eked out a 2-1 win over Syria in their most recent World Cup qualifying match Thursday night. Captain Son Heung-min's 89th-minute winner may have created a thrilling finish at Ansan Wa Stadium in Ansan, 40 kilometers south of Seoul, but the process that led to the narrow victory left a lot to be desired for Paulo Bento's team.

Many of the same problems that had long plagued South Korean football reared their ugly heads in that match. 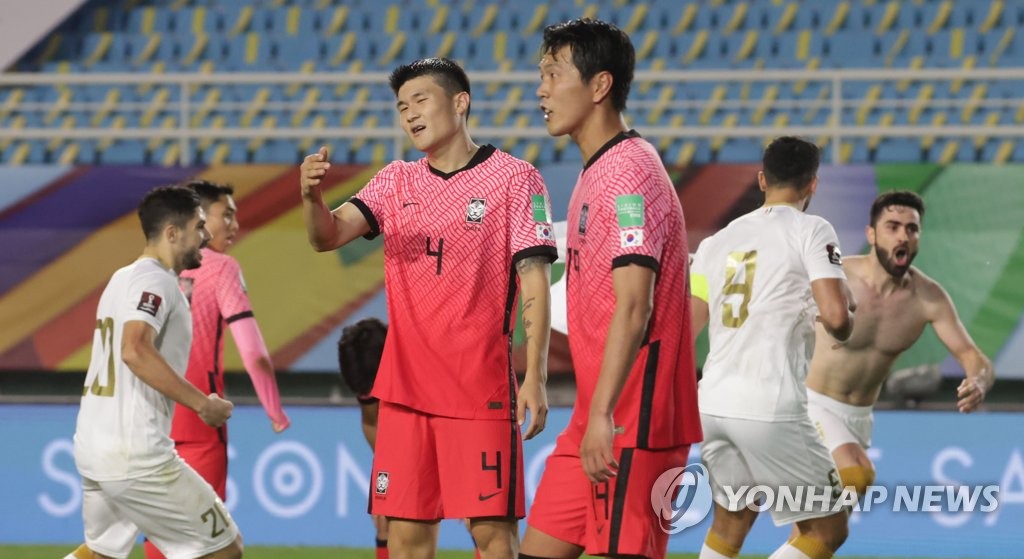 This is getting to sound like a broken record: South Korea still have trouble scoring against inferior opponents and their defenders still suffer lapses of concentration at the worst possible moments.

In their two previous Group A matches, South Korea had managed just one goal. But with Son Heung-min of Tottenham Hotspur and Hwang Hee-chan of Wolverhampton Wanderers showing great form of late for their Premier League clubs, South Korea looked primed for an offensive breakout this time. Syria came in ranked 81st, 45 spots below South Korea.

Predictably, South Korea dominated ball possession early on, but none of their 10 shots in the first half found the target. Song Min-kyu's 11th-minute header went off the crossbar, and Hwang Hee-chan misfired on three opportunities from close range, having suddenly lost the touch that helped him grab a brace for Wolves last Saturday. 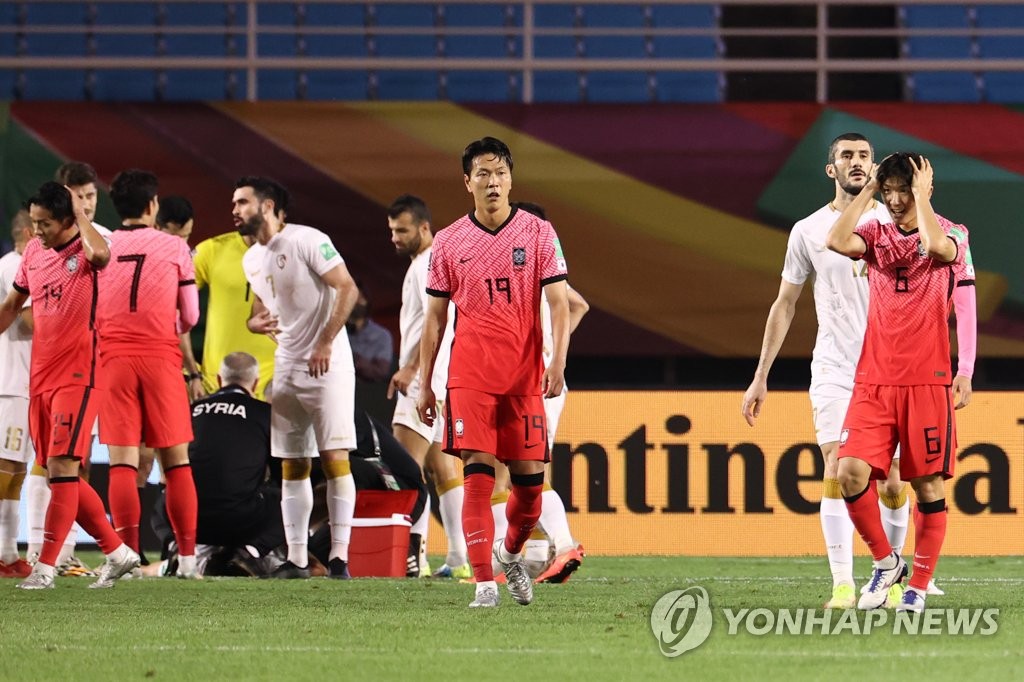 Syria didn't just sit back and crowd their own zone to play defense all evening. They were ready to go toe to toe against the favorites, come hell or high water, and that left space behind their defense that South Korea could have exploited.

Instead, Bento's patented and much-maligned buildup plays never amounted to much, and only ended up giving more ammunition to critics of the system. Passes from the back lacked speed or precision, and by the time South Korea entered the attacking zone, the Syrians were all set and ready to defend.

Local television commentator Hahn Jun-hea said he would have liked to see a more diversified attack from South Korea.

"Hwang Hee-chan on the left and Son Heung-min in the middle should have been switching places to keep the defense off balance and confused," Hahn said. "I also didn't see enough passing in the space between the Syrian defense and midfield." 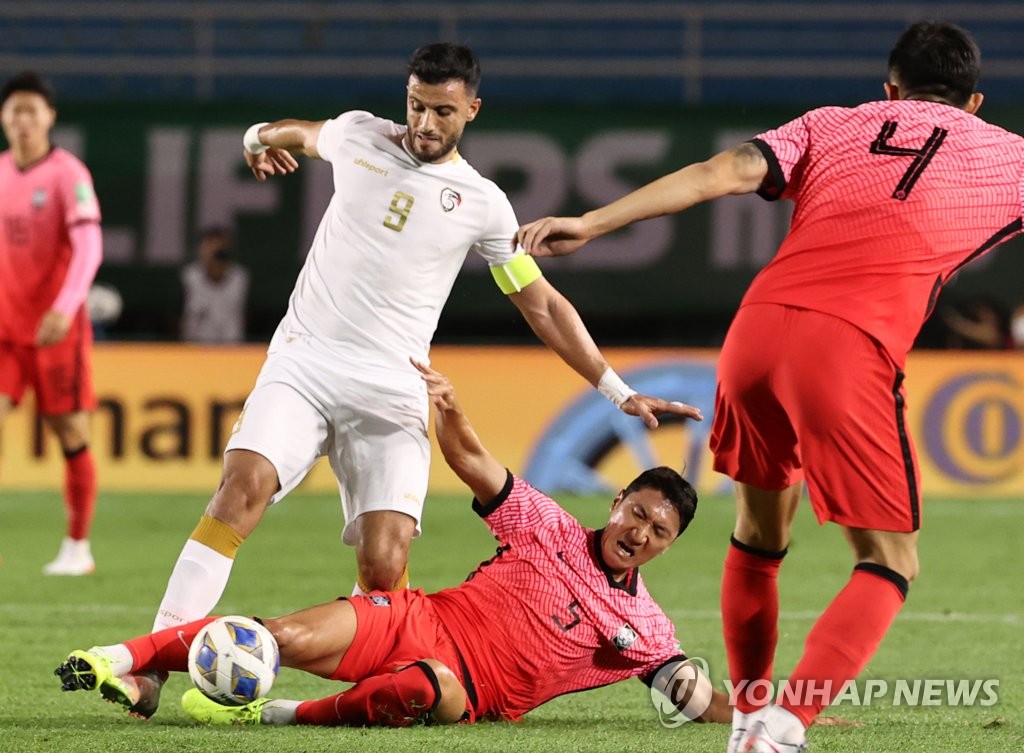 South Korea leaned on a great individual effort by midfielder Hwang In-beom to get the opening goal in the 48th minute. He faked a shot with his right foot to shake himself loose from a defender, before scoring with his left foot from the top of the box.

Bento said afterward that South Korea's worst stretch of the night came after that first goal. It certainly looked as though some players let their guard down on defense, and it resulted in an 84th-minute equalizer courtesy of Omar Kharbin.

Kharbin had a dangerous chance five minutes after Hwang's goal. But the forward was somehow left wide open by the napping South Korean defense, as he finally got on the board by converting a headed pass from Alaa Al Dali.

If Son hadn't come to the rescue, South Korea would have settled for a draw so gutting that it would have felt like a loss. That doesn't bode well for South Korea heading into their biggest challenge yet: an away match against Iran.

At No. 22, Iran are the highest-ranked Asian team. South Korea are winless in seven matches in Tehran, with two draws and five losses.

"Bento's team barely survived against Syria, and Iran will be playing on a higher level than Syria," Hahn said. "(South Korea) will have to be much better prepared." 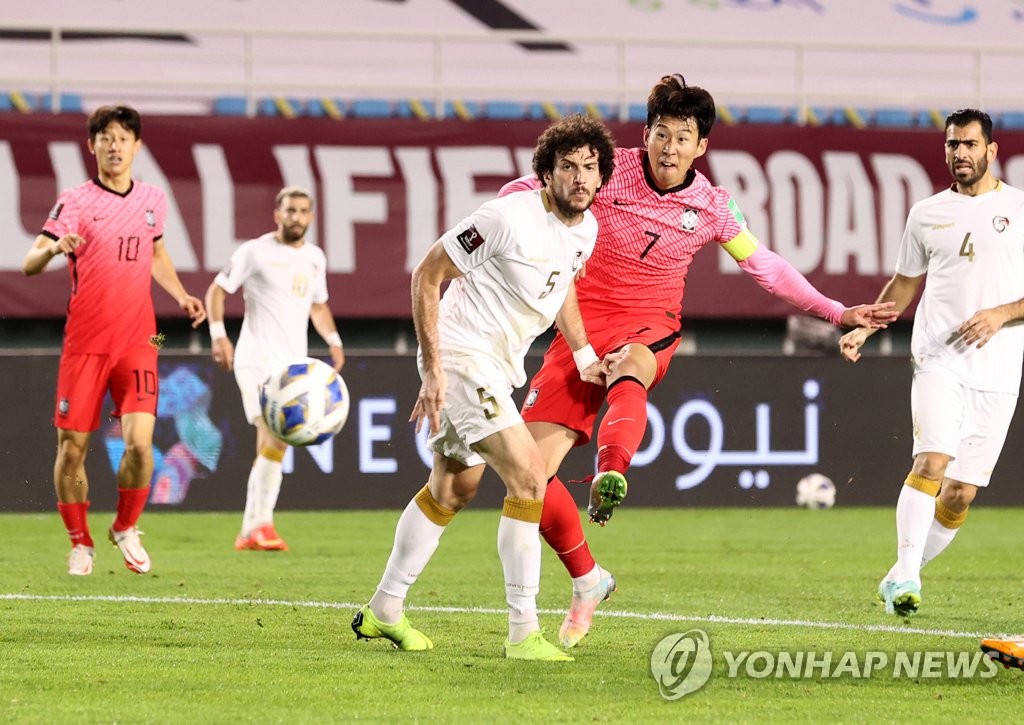