SEOUL, Oct. 10 (Yonhap) -- Lee Jae-myung has been known to be an aggressive public administrator whose relentless drive to get things done, often in sensational ways, landed him the presidential nomination of the ruling liberal Democratic Party on Sunday.

The 56-year-old governor of Gyeonggi, South Korea's most populous province, is a self-professed champion of the poor and neglected and has espoused the policy of a universal basic income.

Lee was born into dire poverty in the southeastern city of Andong, the seventh of nine children. At age 12, his family moved to Seongnam, Gyeonggi Province, where Lee worked at various factories, damaging his sense of smell and an arm in the process.

In the modern Korean vernacular, Lee was a "dirt spoon" -- as opposed to a "gold spoon" -- who was born poor and had little hope for social mobility. 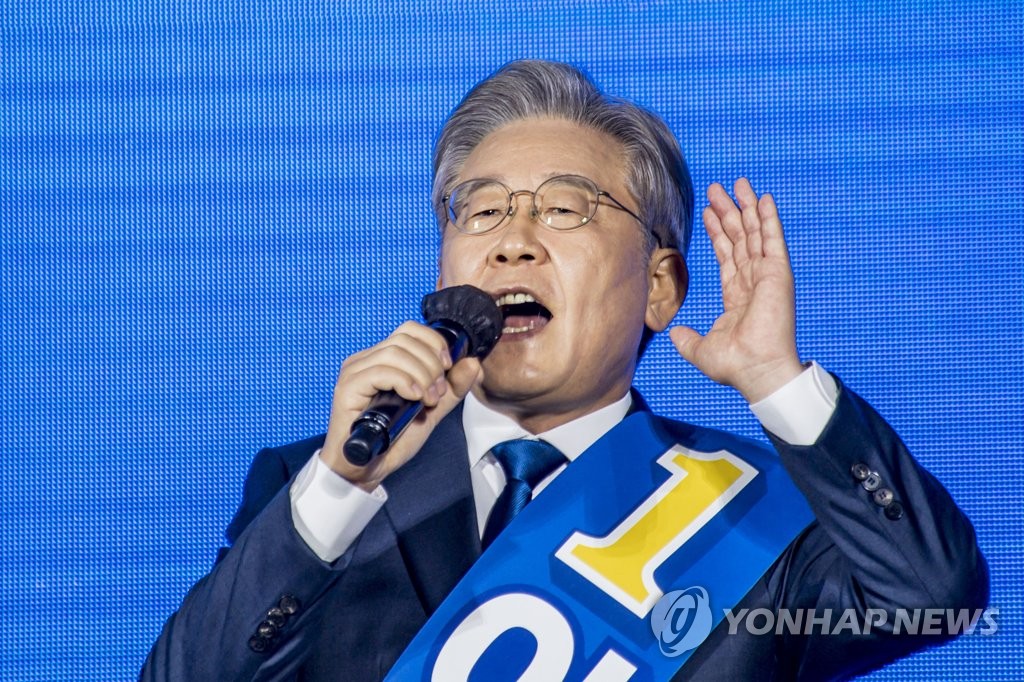 Unable to go to school during the day, Lee got into high school and college via qualification exams, and studied law at Chung-Ang University on a scholarship.

In 1986, he passed the bar and worked as a human rights lawyer after being inspired by a lecture given by former president and liberal icon Roh Moo-hyun.

His first foray into politics was in 2006, when he ran for mayor of Seongnam and lost. Two years later he made an unsuccessful bid for a seat in the National Assembly.

In 2010, he ran again for mayor of Seongnam and this time he won. Four years later he was reelected.

During his mayoralty, Lee aggressively pushed a raft of welfare programs despite opposition from the central government, including a universal basic income for young people, free school uniforms and free postnatal care.

Universal basic income became one of his signature policies that lasted through both his terms as mayor and his time as governor of Gyeonggi. 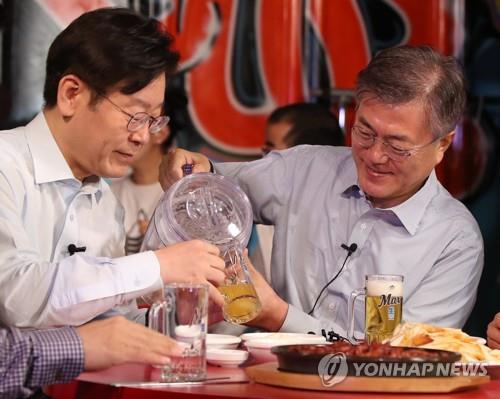 While the central government weighed the scope of COVID-19 disaster relief payments, Lee gave all Gyeonggi residents 100,000 won (US$84) each, ignoring criticism that he was a populist.

Lee's aggressive style of public administration was also seen in the way he forced the cooperation of a minor religious sect at the center of the first wave of the COVID-19 pandemic in the country, as well as in his forced removal of illegal structures tainting the natural beauty of his province.

The nominee is known for his trademark "cider" remarks, a reference to the imagined sensation of carbonated drinks unclogging one's digestive system, which earned him a large following and catapulted him to political stardom ahead of the 2017 presidential race.

In particular, he stood at the forefront of the national campaign to impeach then president Park Geun-hye when his party was still undecided on what to do.

Lee eventually lost to now President Moon Jae-in in the 2017 primaries, finishing third overall, but the next year he was voted in as the first liberal governor of Gyeonggi in 16 years.

The nominee has been dogged by a number of high-profile scandals surrounding his personal life, which have led some to question his caliber as a potential future president. 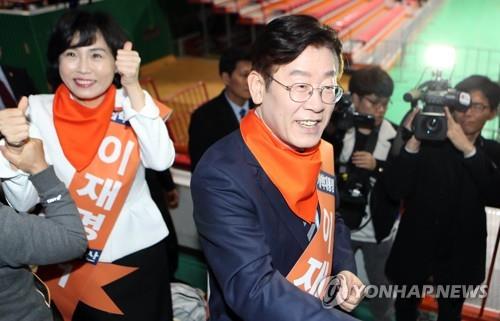 Top among them is an alleged extramarital affair he had with a well-known actress. To prove the affair, the actress alleged that the governor had a birthmark on his genitals and Lee underwent a medical exam to disprove her claim.

In July, one of his competitors raised the subject of the alleged affair at a preliminary debate, to which Lee responded with typical boldness: "Should I drop my pants again?"

Another persistent source of embarrassment has been a recording of a 2012 phone call between Lee and his third eldest brother's wife in which he is heard unleashing a stream of profanities.

Lee has been accused of trying to force the same brother, who is now deceased, into a psychiatric ward, and a related trial nearly cost him his governorship before he was cleared of all charges in October last year.

Most recently, Lee became the target of a massive corruption scandal surrounding a land development project that took place in Seongnam during his time as mayor.

Suspicions have been raised that Lee was involved in allowing a little known private asset management company to reap 1,000 times the amount it invested in the project in profits.

Lee, who has denied any connection to the scandal, was recently mocked for claiming his innocence in a parody of the Netflix runaway hit series "Squid Game" that appeared online.

The governor is married to Kim Hye-kyung, a piano major, and the couple has two sons.