Trading volume was moderate at about 659 million shares worth some 12.5 trillion won (US$10.5 billion), with gainers outnumbering losers 484 to 384. 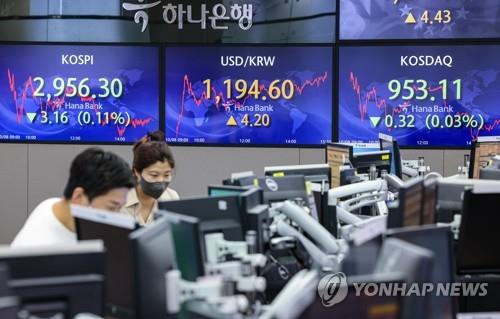 The KOSPI got off to a strong start after overnight Wall Street gains, as a temporary resolution of the debt-ceiling tussle is due for a vote in Washington.

The key stock index turned to losses in the afternoon, following reports that trading was suspended for the heavily indebted Fantasia Holdings Group Co., a developer of luxury apartments in China.

Investors have kept a wary eye on the communist country's move to tighten its regulations to reign in the property market. Evergrande Group, one of the leading property developers in China, remained a risk in the Asian stock markets.

"Investors seem to be under psychological pressure from China, since Evergrande and other developers are struggling to repay their debt on time," HI Investment & Securities analyst Park Sang-hyun said.

Bond prices, which move inversely to yields, closed higher. The yield on three-year Treasurys lost 0.3 basis point to 1.701 percent, and the return on the benchmark five-year government bond fell 1.7 basis points to 2.049 percent.