SEOUL, Oct. 8 (Yonhap) -- The chief of the ruling Democratic Party (DP) met with Italy's ambassador on Friday and asked for support for President Moon Jae-in's push for a declaration to formally end the Korean War.

"It is a shame that the war on the Korean Peninsula remains undone," Rep. Song Young-gil, chairman of the party, said during the meeting with Italian Ambassador Federico Failla at the National Assembly.

The South and the North are still technically in a state of conflict as the 1950-53 Korean War ended in a truce, not a peace treaty. Last month, Moon called for an end-of-war declaration during his U.N. General Assembly speech.

During Friday's meeting, Song also requested the ambassador's help in arranging a visit to North Korea by Pope Francis so as to help improve inter-Korean ties.

In response, the Italian ambassador said his country has the will to cooperate entirely with South Korea to relieve conflicts on the Korean Peninsula. 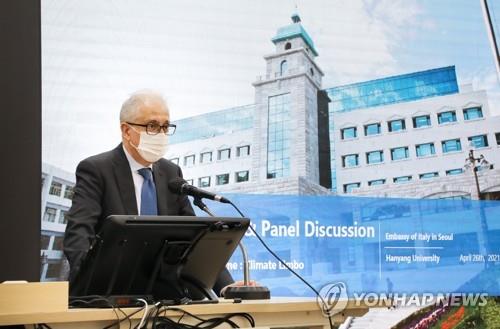