SEOUL, Oct. 8 (Yonhap) -- Investigations into a key suspect in the snowballing corruption scandal surrounding a lucrative land development project near Seoul are expected to make progress, as police said Friday they have secured his mobile phone.

The Gyeonggi Nambu Police Agency in Suwon, south of Seoul, said its investigators have discovered a mobile phone of Yoo Dong-gyu, former acting president of Seongnam Development Corp., which went missing during a prosecution raid on the suspect's home in Yongin, also south of Seoul, on Sept. 29. 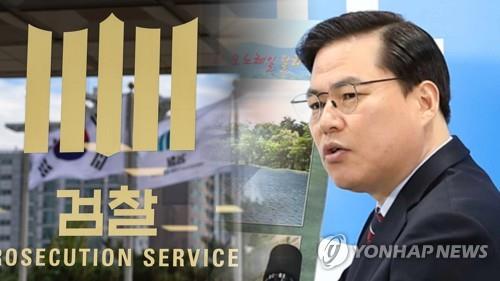 Yoo reportedly threw his phone out the window of his apartment home during the raid, and prosecutors said later they failed to seize his phone.

The Gyeonggi police agency had reportedly tracked down a person who picked up Yoo's phone outside his apartment through an analysis of its surveillance cameras before confiscating the phone.

The unidentified person is also under investigation on possible charges of criminal collusion with Yoo.

A police official said police are currently scrutinizing the suspect's phone and will actively cooperate with the prosecution on the matter.

Yoo, reported by some media as having a close relationship with Gyeonggi Gov. Lee Jae-myung, the ruling Democratic Party's leading presidential contender, is said to have been deeply involved in the controversial land development project in Seongnam's Daejang-dong district launched in 2015, when the governor was serving as the city's mayor.

Yoo was formally put under pretrial detention over the weekend on charges of breach of trust and bribery in connection with the scandal-ridden project.

Yoo was accused of receiving 1.1 billion won (US$930,138) in kickbacks, and fresh allegations surfaced Friday that the suspect pocketed an additional 830 million won from a contractor.