The measure came in response to a formal report submitted by the Korean Confederation of Trade Unions (KCTU) on its plan to hold outdoor rallies in some areas of the capital on Oct. 20. The KCTU stated it will carry out a general strike on the day.

City authorities, however, sent an official document to the KCTU notifying it of a decision to forbid such rallies. The city government plans to maintain a ban on street rallies as part of efforts to curb the spread of COVID-19, with stringent social distancing restrictions in place.

It raises the possibility that KCTU members will again push for "guerrilla-style" illicit rallies as they did in downtown Seoul in July that led to the arrest of the labor organization's leader, Yang Kyung-soo.

Under the Infectious Disease Control and Prevention Act, the Seoul mayor is empowered to prohibit rallies in the city. 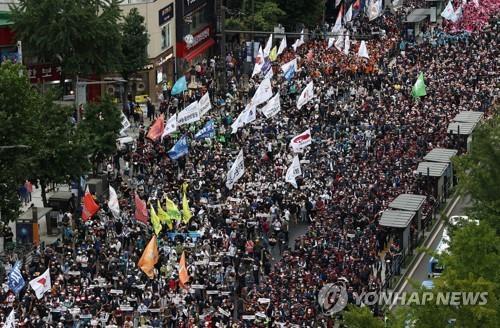