Choi batted 0-for-2 against the Boston Red Sox in Game 3 of the American League Division Series (ALDS) at Fenway Park in Boston on Sunday (local time), as the Rays fell 6-4 in 13 innings.

Choi remained on the bench in the Rays' 5-0 win in Game 1. Then for Game 2, Choi entered as a defensive replacement for Jordan Luplow at first base and batted 2-for-3 with a solo home run in a 14-6 loss.

The Red Sox had started left-handers in each of the two previous games, but with the righty Nathan Eovaldi on the hill in Game 3, left-handed batting Choi got the start at first base.

Batting fifth, Choi struck out swinging his first time up in the opening inning. Choi led off the top of the fourth inning with the Rays trailing 3-2 and grounded out to first base.

Left-handed reliever Josh Taylor opened the top of the sixth inning for the Red Sox, now trying to protect a 4-2 lead. And following a one-out single by Nelson Cruz, Choi was lifted for pinch hitter Yandy Diaz.

The Rays rallied for two runs in the eighth, but the Sox got the last laugh thanks to a walk-off, two-run homer by Christian Vazquez in the 13th. 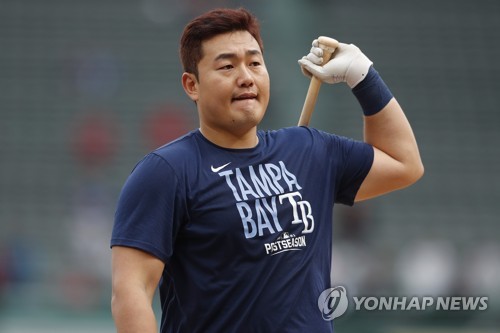