SEOUL, Oct. 11 (Yonhap) -- The chief of the ruling Democratic Party (DP) said Monday the nomination of Gyeonggi Gov. Lee Jae-myung as its presidential candidate was confirmed and decided in accordance with the party rules after runner-up ex-Prime Minister Lee Nak-yon appealed the results.

Lee Jae-myung won 50.29 percent of all votes cast in the course of the party's 11-round primary since last month, followed by Lee Nak-yon with 39.14 percent. The governor needed a majority of the votes to avoid a runoff.

"We announced Lee Jae-myung as the DP candidate for the 20th presidential election yesterday," Rep. Song Young-gil, chairman of the party, told reporters at the national cemetery in the central city of Daejeon accompanying the governor.

Hours after Lee Jae-myung's victory, Lee Nak-yon's camp said it will appeal the results, arguing that votes thrown in support of two candidates who dropped out midway through the primary -- Chung Se-kyun and Kim Doo-gwan -- should have counted toward the total votes.

The DP said it followed a party rule stipulating votes cast for candidates who pull out from the primary be voided, but the Lee Nak-yon camp said ballots for Chung and Kim cast before their withdrawal should not be considered as votes for "candidates who pulled out."

"When we take these votes into account, Lee Jae-myung's winning total falls below a majority to 49.32 percent, requiring a runoff election," Rep. Hong Young-pyo said during a press conference.

Later Monday, the Lee Nak-yon camp officially filed an objection with the party headquarters, calling for a final runoff.

Song, however, has said that the specific clause was approved during a party convention in August last year when Lee Nak-yon himself was elected as then party chief.

"Just like South Korea is run by the Constitution, the ruling DP is also run by a party constitution and regulations," Song said.

On his rival's appeal, Lee Jae-myung said he expects the party to wisely handle the issue based on "common sense, principle, and party constitution and regulations." 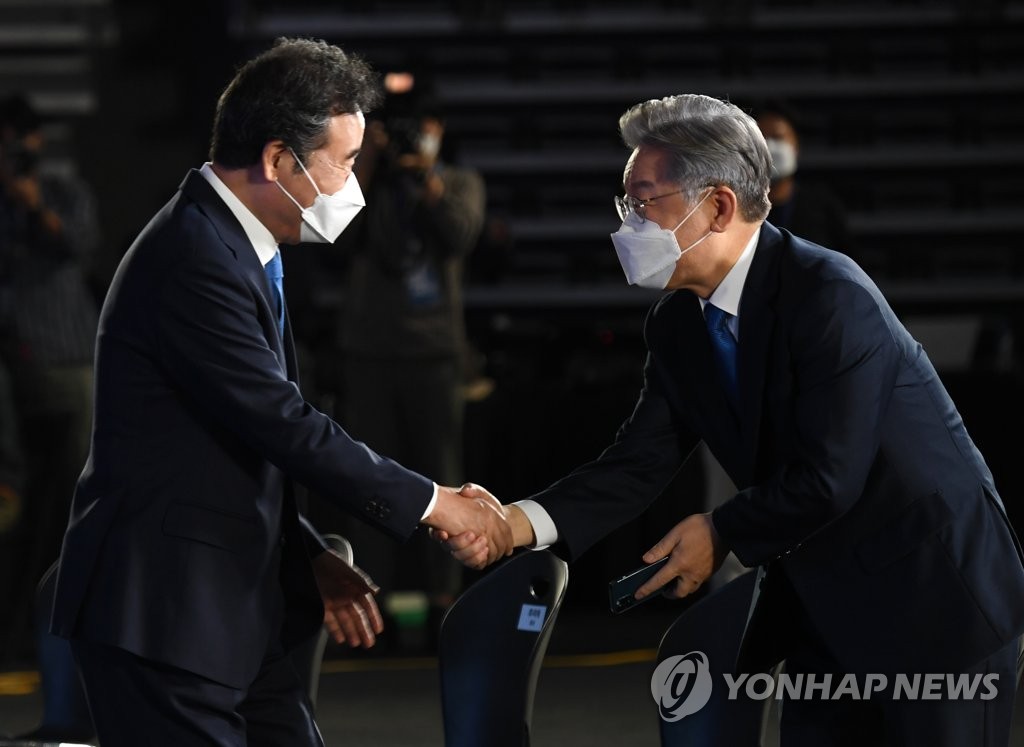