SEOUL, Oct. 11 (Yonhap) -- Prosecutors on Monday questioned the owner of an asset management firm at the center of a snowballing regional development corruption scandal over allegations that his firm received massive business favors in exchange for bribes.

Kim allegedly gave Yoo 500 million won (US$418,769) as part of a deal to pay him a total of 70 billion won. Allegations have also been raised that Yoo is the real owner of one of Hwacheon Daeyu's seven subsidiaries, Cheonhwa Dongin No. 1, that is owned on paper by Kim.

On Monday, Kim denied any wrongdoing, arguing he is the real owner of Cheonhwa Dongin No. 1 and claiming the allegations against him have been wrongfully raised by one of his business partners at odds over how profits should be divided.

"I am very sorry for causing a disturbance," Kim told reporters upon arriving at the Seoul Central District Prosecutors' Office. "No illegal funds have been traded. Many of the suspicions that have been raised so far will be resolved if the prosecution looks into the list of money deposits and withdrawals."

The questioning of Kim is expected to last late into the night as there are many allegations to examine. At the end of the questioning, prosecutors could seek an arrest warrant for him on charges of offering bribes. 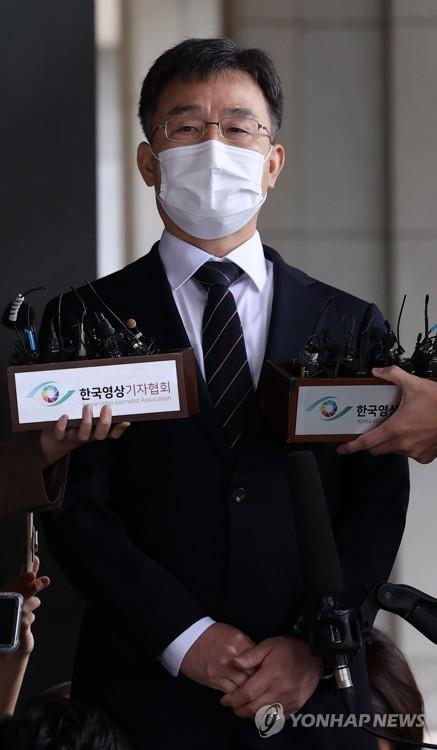 The scandal has been the hottest issue in South Korea amid opposition accusations that Gyeonggi Province Gov. Lee Jae-myung, who won the ruling Democratic Party's presidential nomination Sunday, is responsible as mayor of Seongnam at the time.

Yoo is considered a close associate of Lee, and it was when Lee was mayor that the Daejang-dong project was undertaken. Moreover, Kim interviewed Lee seven months before establishing the asset firm.

However, Lee has categorically rejected all allegations as "fake news."

Kim is also suspected of paying high-profile, influential people in the legal community, like former Supreme Court Justice Kwon Soon-il and a former special prosecutor, in the form of hiring them as its legal advisers.

Kwon was one of the highest court's justices who ruled in favor of Lee, who was accused of violating the election law. Before the decision, Kim was found to have visited Kwon many times as a reporter, spurring suspicions that Kim could have lobbied for Lee.

"The judiciary of our country isn't an organization that can be swayed like that," he said. "The talk about (Lee's) trial is so absurd."
(END)