SEOUL, Oct. 11 (Yonhap) -- Gyeonggi Gov. Lee Jae-myung is leading the presidential race with 35.8 percent of support against his opposition rival and former top prosecutor Yoon Seok-youl at 33.2 percent in a hypothetical two-way competition between the two contenders, a poll showed Monday.

The difference was within the survey's margin of error of plus or minus 3.1 percentage points with a 95 percent confidence level. The survey was conducted Friday and Saturday on 1,002 adults by the Korea Society Opinion Institute, commissioned by local cable news channel TBS.

When pitted against Rep. Hong Joon-pyo of the main opposition People Power Party, Lee led with 35.2 percent against Hong's 33 percent, again within the margin of error.

Asked about the theme of the upcoming election, 51.5 percent of the respondents said it was for a change of government, while 39.7 percent said it was to maintain the reins of power, the poll said.

On Sunday, the ruling Democratic Party announced the nomination of Lee as its candidate for president after the lawyer-turned-politician won 50.29 percent of all votes cast in the course of the party's 11-round primary that began last month, followed by former Prime Minister Lee Nak-yon with 39.14 percent. 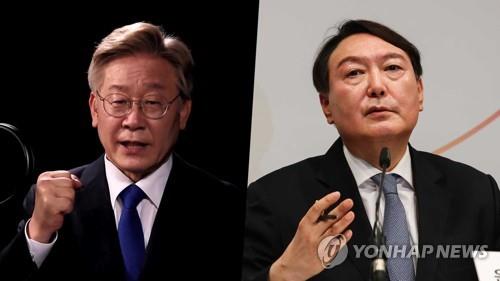