Outbound shipments of kimchi reached US$111.5 million in the January-August period, up 13.8 percent from a year earlier, according to the data from the Korea Customs Service and the food industry.

In contrast, imports of kimchi shrank 9.7 percent on-year to $86.1 million over the cited period, resulting in a trade surplus of $25.4 million in the sector.

In light of the trend, South Korea is widely expected to register a surplus in the kimchi trade for the first time in 12 years in 2021. 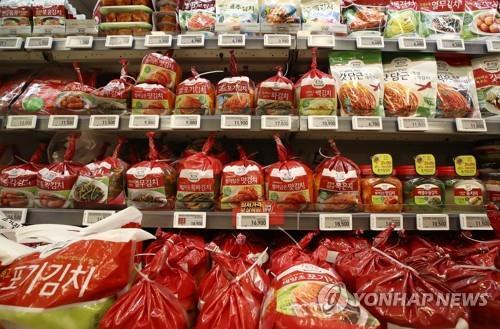 Industry sources attributed the solid rise in kimchi exports mainly to growing overseas perception that the fermented dish is considered to boost the body's immunity amid the outbreak of COVID-19, as well as foreigners' greater interest in Korean foods thanks to the popularity of Korean pop culture abroad.

By destination, exports to Japan accounted for the largest portion of $57.2 million in the eight-month period, followed by the United States with $18.9 million and Hong Kong with $5.4 million.

The sharp drop in kimchi imports came as a video showing unsanitary handling of cabbage soaked in salt went viral in March in China, the largest exporter of kimchi to South Korea.

Imports of kimchi from China came to $9.9 million a month later, falling below the $10 million mark for the first time in nearly two years, before dropping further to $8.2 million in July.
(END)