SEOUL, Oct. 12 (Yonhap) -- The ultimate goal of policy on North Korean defectors living in South Korea should go beyond helping their economic stability but making them accepted as "ordinary neighbors" facing no prejudice and discrimination, the head of South Korea's state-run resettlement agency said.

Jung In-sung, president of the Korea Hana Foundation, vowed to continued efforts to expand communication and exchanges between North Korean defectors and South Korean citizens to ensure that the defectors can become part of the South Korean society and serve as a strong foundation for future unification between the two Koreas.

The Korean Hana Foundation was established in 2010 by the unification ministry to help the resettlement of North Korean defectors whose number stands at around 34,000. Jung, a former senior Won Buddhism official, took office as head of the foundation in March 2020.

"Previous support for North Korean defectors had been focused on helping them secure economic self-reliance," Jung told Yonhap News Agency in a recent interview in his office in western Seoul. "But economic support has its limits. It would be half a success should North Korean defectors not be able to be completely included and united in our society."

"In line with the policy direction and from a perspective of inclusion, our foundation will make more efforts to provide programs that can expand communication and exchanges between North Korean defectors and South Korean people," he said.

People in the two Koreas speak the same language, Hangeul, South Koreans do not understand some North Korean dialects and some of them tend to look down on people who speak with a strong North Korean accent. 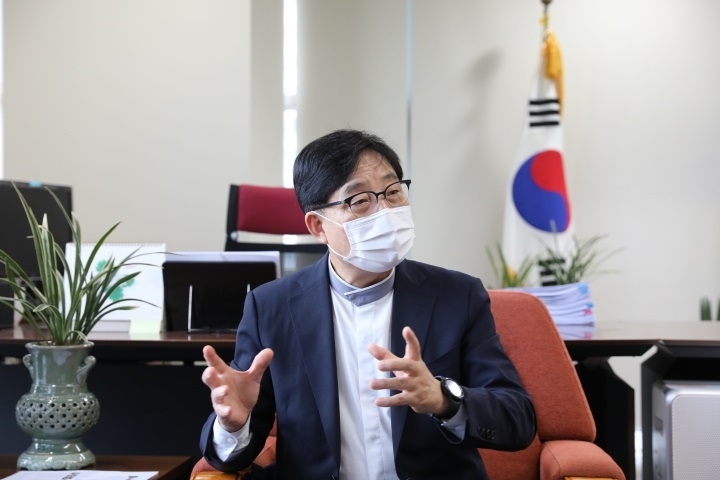 Jung took office months after the death of a North Korean defector and her small kid shocked South Korean society as they were believed to have died from starvation, which prompted the Seoul government to find any "blind spot" in its resettlement programs.

In his inauguration speech, Jung emphasized, "There is no blind spot at desks but in the fields," pledging to devote much of his time to getting a first-hand look at the reality that North Korean defectors are facing and find solutions to any problems.

Jung reiterated the belief in the interview, saying he has tried to practice what he preached and done his best to go wherever there is a need for support from his foundation. Long involved in cross-border exchanges, he said that such trips helped remind himself of challenges confronting many North Korean defectors.

"They lived in a country with different political and cultural backgrounds from ours. They don't have many to rely on here. They have to address their economic difficulties on their own, while at the same time trying to win in competition with people in the South," Jung said.

Jung said he has focused on reducing blind spots where North Korean defectors in desperate need had not been detected and finding effective methods to help them. In a related move, the foundation launched the "solution committee" made up of experts in relevant fields that works to find solutions tailored to the needs of any defector found to be in dire situations.

"It might be impossible to eliminate blind spots completely. It is important to map out appropriate measures through a mechanism when a blind spot is detected," Jung said.

He said that the protracted fight against COVID-19 has taken a heavier toll on North Korean defectors, many of them working in the less secure service sector and in irregular working positions, which have been hit hard by fewer operating hours and less consumer demand caused by the nationwide antivirus campaign.

He, however, stressed that what is making it even harder for many North Korean defectors to make "a complete resettlement" in South Korea is deep-seated prejudice and misunderstanding against them.

"It is still true that there exists prejudice, misunderstanding and discrimination against North Korean defectors, which makes it harder for their complete settlement in our society," he said. "North Korean defectors should be regarded as the future of unification that came first and accepted as our ordinary neighbors."