NEW YORK, Oct. 11 (Yonhap) -- North Korean defector-turned-lawmaker said Monday that South Korea should step up efforts to improve the human rights situation in North Korea, along with its proposal to declare the formal end to the Korean War.

Rep. Tae Young-ho of the main opposition People Power Party made the remark during an interview with Yonhap News Agency while in New York for a parliamentary audit of the South Korean Embassy to the United Nations.

Critics have said the human rights issue has been sidelined over the past few years under the liberal Moon administration on concerns that it could anger Pyongyang and hamper efforts to resume denuclearization talks.

As part of efforts, Tae urged South Korea to co-sponsor a U.N. Human Rights Council resolution on North Korea's rights violations, which the Seoul government has dropped out of since 2019 to avoid tensions with Pyongyang amid its efforts to resume inter-Korean dialogue.

In this year's resolution, the council voiced concerns over rights violations, which it said constitute crimes against humanity in many instances and stressed that the situation may further deteriorate due to the COVID-19 pandemic.

Tae said he couldn't even imagine he would be at the U.N. as the first defector-turned-lawmaker attending the parliamentary audit on the overseas mission, just across from the North Korean representative's office.

"When I came to (South) Korea five years ago, I couldn't imagine that I would be a former (North Korean) diplomat and a lawmaker attending a parliamentary audit on the Korean Embassy overseas," Tae told Yonhap News after the parliamentary session. 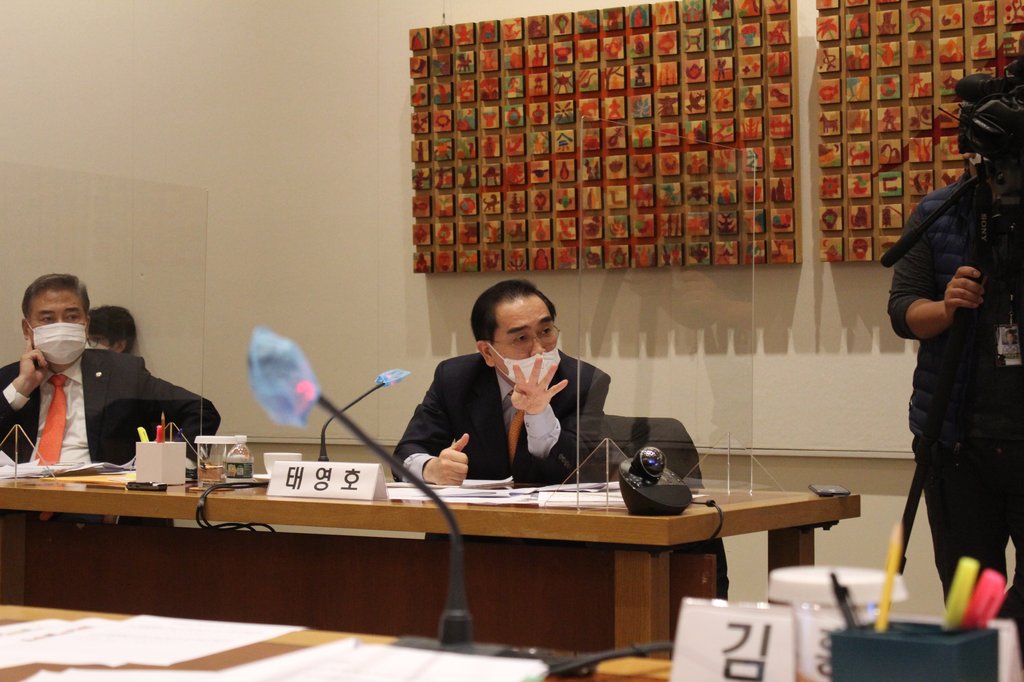 The former No. 2 diplomat in North Korea's Embassy in London said the Moon Jae-in administration should pay more attention to the human rights abuses under the Kim Jong-un regime in order to take a step forward for peace on the Korean Peninsula.

Tae made the remark after President Moon Jae-in last month renewed his calls for the declaration of a formal end to the 1950-53 Korean War, which ended in a truce, not a peace treaty, during his U.N. speech.