(ATTN: UPDATES with Moon's remarks on economy in last 5 paras)

SEOUL, Oct. 12 (Yonhap) -- President Moon Jae-in said Tuesday that the country is about to enter the "last gateway" to a return to normal following the COVID-19 pandemic.

Moon made the remark during a Cabinet meeting at Cheong Wa Dae, referring to Wednesday's planned launch of a new government-civilian committee handling the transition from COVID-19 to everyday life. 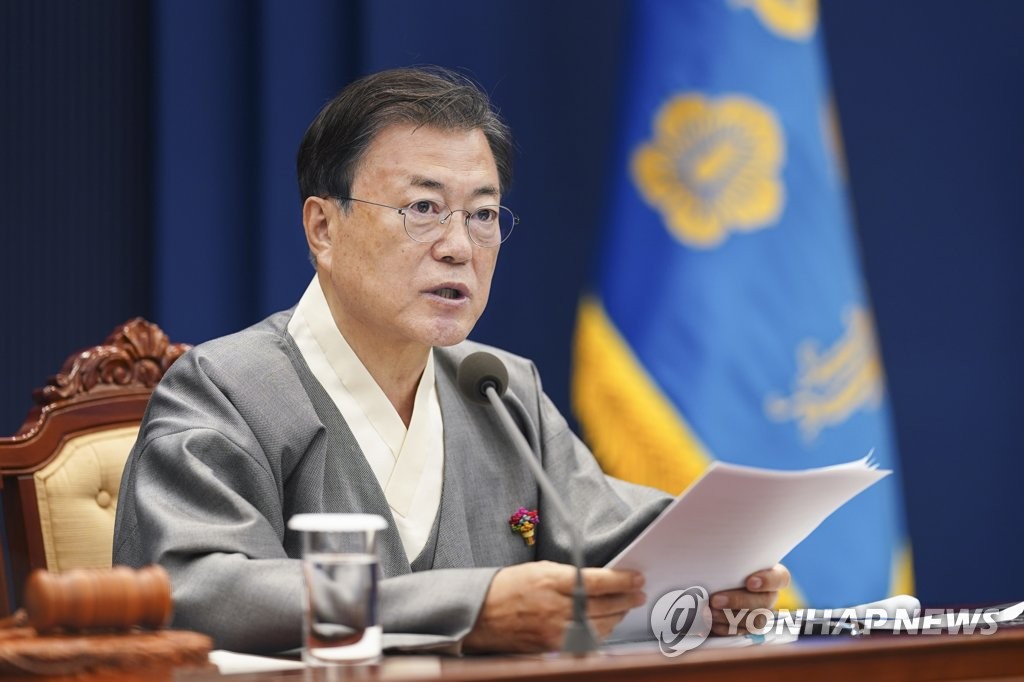 "We have done well until now, and if we hang on a little longer, we will be able to enter the stage of returning to normal as planned, in line with everyone's wishes," he said.

The launch of the committee will be the "last gateway to a gradual return to normal," he added.

Moon noted that the spread of infections has slowed recently and that more than 40 million South Koreans have received their first vaccine shot, with over 60 percent fully vaccinated.

He also said the global popularity of K-pop and K-drama has led to the growth of related industries and that the best way to help artists and cultural sector workers struggling under the pandemic is to quickly return to normal life.

Moon was dressed in "hanbok," the traditional Korean dress, along with other Cabinet members, to coincide with the culture ministry's designation of Oct. 11-17 as "Fall Hanbok Culture Week."

Cheong Wa Dae said it hoped to use the meeting to promote hanbok at a time when many hanbok businesses are suffering due to the pandemic.

Moon told the meeting the country's macroeconomy is "doing quite well, with a strong foundation."

He went on to say that South Korea has maintained its highest-ever credit level and posted annual economic growth projections of over 4 percent despite downward revisions across the globe.

"The fact that our export levels are reaching new highs every month is another good indicator," he said.

Still, Moon called for readiness against global economic uncertainty, saying prices are soaring in major economies due to rising oil and raw material prices and increased demand on the back of an overall economic recovery.

"Our prices are relatively low, but they are still putting pressure on people's livelihoods," he said.