SEOUL, Oct. 12 (Yonhap) -- Rapper NO:EL was arrested Tuesday on charges of driving without a license, refusing to take a breathalyzer test and headbutting a police officer last month.

Police took the 21-year-old, whose real name is Chang Yong-jun, into custody after the Seoul Central District Court issued an arrest warrant for him, saying that investigations have found the allegations to be likely true and there is a flight risk.

The incident took place on the night of Sept. 18 when Chang caused a fender bender while driving his Mercedes in southern Seoul.

Police sent to the scene asked the rapper to take a breathalyzer test, but he refused and headbutted the police officer, according to prosecution officials.

"I am truly sorry to many people and will take responsibility for my wrongdoings," Chang said in a statement issued through his lawyer, adding that he forsakes his right to attend the arrest warrant hearing to repent for his actions. 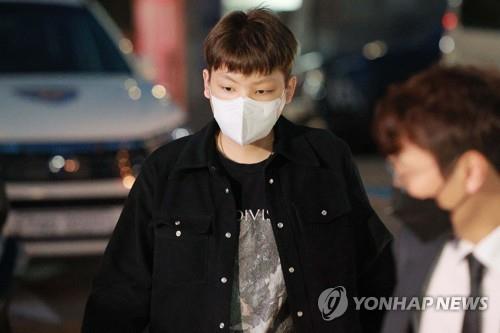