SEOUL, Oct. 12 (Yonhap) -- Seoul shares closed lower for a second straight session Tuesday on foreign selling amid concerns over inflation sparked by surging prices of oil and other energy resources. The Korean won fell against the U.S. dollar.

Trading volume was moderate at about 648 million shares worth some 12.5 trillion won (US$10.4 billion), with losers outnumbering gainers 572 to 310. 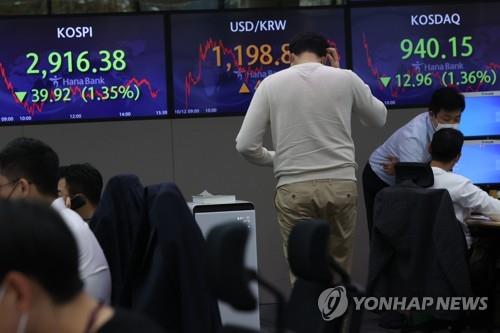 Foreigners and institutions offloaded stocks, as they expect a recent fall in the U.S. jobless data would not suffice to slow the U.S. Federal Reserve's timeline for tapering its stimulus, analysts said.

KOSPI declined despite a rate-freeze by the central bank. The Bank of Korea held its policy rate at 0.75 percent in October.

The index slumped the entire session on spiking energy costs, with benchmark oil prices surpassing US$80 a barrel on expectations the global power shortage would last longer.

A coal shortage in China also fanned anxiety of less production of industrial metals, such as aluminum.

Most shares closed lower across the board.

Bond prices, which move inversely to yields, closed lower. The yield on three-year Treasurys soared 11.4 basis points to 1.815 percent, and the return on the benchmark five-year government bond jumped 8.6 basis points to 1.135 percent.