SEOUL, Oct. 12 (Yonhap) -- Rising rookie group Enhypen on Tuesday expressed hope for becoming the hottest band in the K-pop industry during a media event before dropping the first full-length album after the group's debut about a year ago.

"We want to grow more in the future and become the hottest K-pop group, not just being a group representing rookie bands," the band's leader Jung-won said during an online media showcase for the new album in Seoul.

Set to be uploaded on online music streaming sites at 6 p.m. (on Korean time), the new album titled "Dimension: Dilemma" has drawn much anticipation from K-pop fans for being the first full album from one of the top rookie groups.

It racked up preorders of more than 920,000 copies in three weeks after it first became available on Sept. 17, a sign of another success for the team. 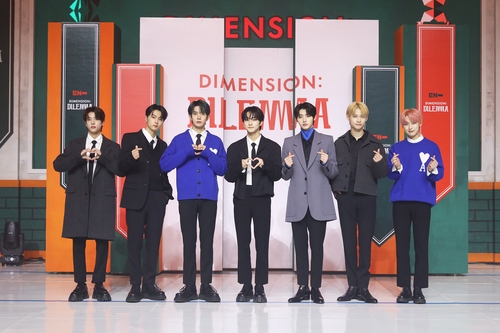 The seven-piece group was formed through the TV audition program "I-Land" (2020), co-produced by entertainment industry giants CJ ENM and Hybe and aired on the music cable TV channel Mnet, and debuted in November 2020 with its first EP "Border: Day One."

Its second EP titled "Border: Carnival" was released in April and reached No. 18 on the Billboard 200 main albums chart. It also topped Japan's Oricon weekly albums chart for two weeks in a row.

The forthcoming album is the first installment of the new "Dimension" album series.

Of the full album, member Jake said, "If the 'Border' series told a story of one standing on the borderline of being a trainee and a rookie singer, this 'Dimension' series would be about how he feels after one year has passed."

The band members honestly shared the complex emotions they felt before and after making their debut as idols in the previous "Border" album series that consists of two EPs. 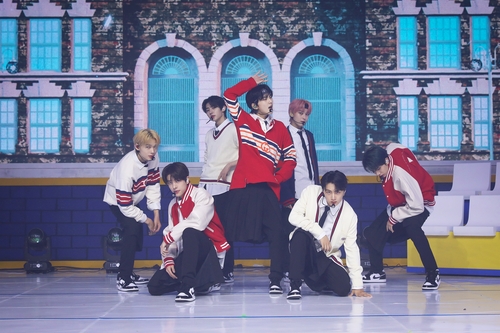 Team leader Jung-won explained the "Dimension" album series depicts what happens to the seven boys after they make it to the K-pop scene and realize that their new world is far more complex than they thought and where conflicting values clash with each other.

"We are eager to grow professionally as Enhypen but sometimes need time to be alone. We want to be loved by as many people as possible but sometimes desire to be free from people's attention. This album depicts these complex emotions," member Hee-seung said of the upcoming release.

The main track "Tamed-Dashed" is a new wave genre number with a 1980s' sentiment. Its lyrics are about the dilemma of whether one should be "tamed" by desire or be "dashed" way from it. The seven other tracks are "Intro: Whiteout," "Upper Side Dreamin'," "I Didn't Know," "Go Big or Go Home," "Blockbuster," "Attention, please!" and "Interlude: Question."