"The two sides noted they have ceaselessly consulted on North Korean issues, including their diplomatic efforts at all levels to engage with North Korea, since the U.S. unveiled its North Korea policy," it said of the meeting.

"The U.S. side reaffirmed the U.S.' sincerity that it holds no hostile policy toward North Korea and also reiterated its stance that it will engage in negotiations with North Korea anytime, anywhere without preconditions. The two sides agreed to continue working closely on concrete ways to engage with North Korea," it added. 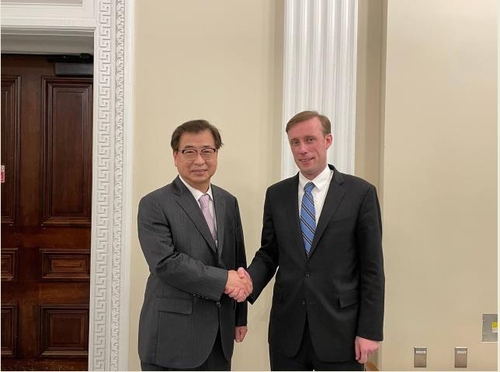 Suh said the U.S. side has expressed strong support for inter-Korean dialogue, while also urging North Korea to respond positively to U.S. overtures.

"The U.S. expressed strong support for North-South Korea dialogue to make breakthroughs in the Korean Peninsula situation and the COVID-19 pandemic," he said while speaking with South Korean reporters in Washington.

"South Korea and the U.S. agreed that practical progress could be made in dealing with current conditions if North Korea engaged more actively in South-North and North-U.S. dialogue," added Suh.

Suh also said he explained Seoul's efforts to formally end the Korean War and to consult closely with Washington on the issue.

"Most of all, I have again confirmed that the U.S. government, too, is greatly interested and determined to promote peace on the Korean Peninsula," he said.

Seoul's ongoing efforts to declare a formal end to the 1950-53 war follow President Moon Jae-in's proposal at the United Nations General Assembly last month that such a move may help kickstart the North's denuclearization process.

"The two sides ... noted follow-up measures are steadily being taken in various areas such as vaccine cooperation, climate change, new technology and semiconductor supply chain since the countries agreed to develop the South Korea-U.S. alliance into a "comprehensive partnership toward future" in the May summit meeting," South Korea's National Security Council said in a press release.