"The South and the U.S. have reached an understanding over the consideration of the working-level dialogue platform to find linkage between the latter's Indo-Pacific Strategy and the former's New Southern Policy," the source told Yonhap News Agency, requesting anonymity.

"But the two sides have yet to reach any decision on when and whether this will be launched and how this will be developed," the source added.

The U.S. has been pushing for the Indo-Pacific Strategy to promote what it calls the rules-based regional order, which it believes could be undermined by China's increasing assertiveness.

On its part, Beijing has been pushing for the One Belt One Road initiative -- a grand geopolitical strategy to connect China with Southeast Asia, Central Asia, Europe and Africa through "land and maritime silk roads."

The issue of the proposed dialogue body is expected to be discussed when Seoul and Washington hold their annual defense ministerial talks, the Security Consultative Meeting, in Seoul later this year. 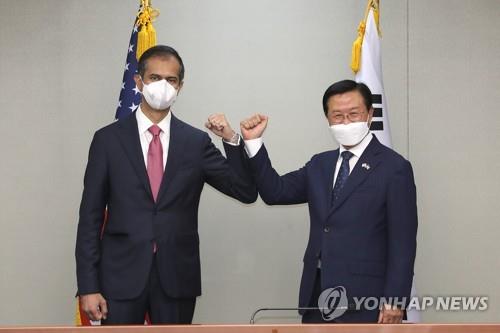