The survey by a pro-labor civic group Gabjil 119 found that over 70 percent of office workers do not know about the revision of the so-called workplace anti-bullying act set to go into effect Thursday.

Under the amendment, bullies can be fined up to 10 million won (US$8,370) if they are either the employer or the employer's family or relatives.

In addition, companies' chiefs may face a fine of up to 5 million won if they do not conduct an investigation after a workplace harassment case takes place and put in efforts to protect the victims.

The survey, however, showed that 72.8 percent and 73.3 percent were unaware of the cited changes, respectively. 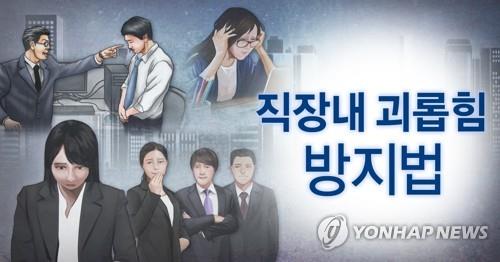 The anti-bullying law was enacted in 2019 in a bid to prevent the widespread but overlooked issue of workplace "gapjil," a Korean term referring to abusive conduct by people in positions of power toward those under their influence.

Questions have been raised, however, on the law's effectiveness as it had only stipulated punitive measures for the workplaces where the harassment took place, not the bullies. Companies with fewer than five employees were also exempt from having to comply with the law.

The survey results show that the government has failed to promote the revision, Gabjil 119 said, adding there are still many workers excluded from the legal protection from workplace harassment, such as special-type workers and those working for companies with fewer than five employees.