Hong, however, noted the recent fluctuations in the local FX market were largely due to external economic risks.

"As always, the government is ready (to take steps) if necessary. I note the government will always be prepared and implement stabilization measures if needed," he added, while speaking to reporters after his participation in the Group of 20 finance ministers and central bank governors' meeting in Washington. 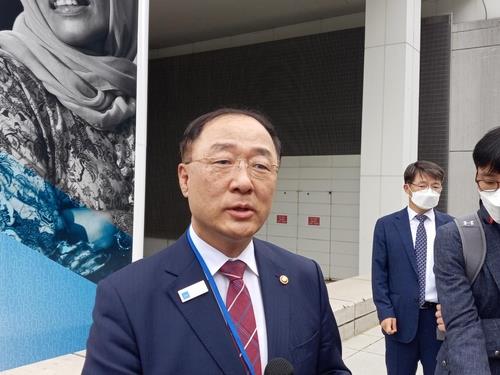 South Korea's foreign exchange reserve reached a record high of $463.97 billion as of end-September, according to the Bank of Korea.

Its local currency, however, dropped nearly 3 percent against the greenback from 1,159.5 won per dollar at the end of August to 1,193.8 won per dollar Wednesday (Seoul time).

"In terms of the recent foreign exchange rate, the strengthening of the U.S. dollar due to global risks and many uncertainties is one factor as you can see," Hong said.

The finance minister said the government will also work to keep tabs on price increases, noting the country's inflation is expected to reach 2 percent growth this year, slightly higher than its 1.8 percent target.

"The government will do its utmost until the end of the year to attain its goal," Hong said.