SEOUL, Oct. 14 (Yonhap) -- A murder suspect, who stunned the nation in August for killing one woman before cutting off his electronic ankle monitor and another afterward, admitted to his charges in his first court trial Thursday.

The 56-year-old suspect, Kang Yoon-seong, said he is ready to receive the death penalty after acknowledging the charges of killing the two women in Seoul, one on Aug. 26 and the other on Aug. 29, during his first court hearing at the Seoul Eastern District Court.

Kang, who has 14 criminal convictions, including sexual offenses, was arrested on Aug. 29 for killing the two women -- one before he cut off his monitoring ankle bracelet and ran away on Aug. 27, and the other while he was on the run. 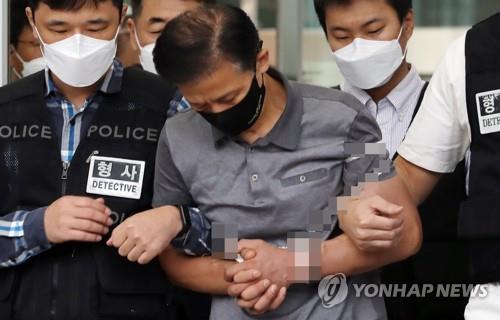 "Murder is wrong no matter how good the reason is. Even if I were sentenced to death today, I wouldn't object. I'm determined to accept that," Kang told the court in a tearful voice.

But the suspect refuted part of the prosecution's indictment regarding his first murder charge, insisting he was just trying to check whether the victim was really dead or pretending to faint, instead of actually intending to stab her to death.

With regard to the second victim, Kang said she was his lover, and he unintentionally killed her after she said she would report him to the police.

Kang was set free in May, wearing the electronic ankle monitor, after serving 15 years in prison over his 2005 conviction for robbery and sexual assault, crimes he committed only five months after his release from prison for similar crimes.

He was under supervision by the probation office but allegedly committed the murders to take the victims' money and goods.