SEOUL, Oct. 14 (Yonhap) -- A major umbrella labor union said Thursday it will hold a large-scale rally in central Seoul next week when its members walk off their jobs for a one-day general strike to call for the enhancement of labor rights.

The Korean Confederation of Trade Unions (KCTU), one of the country's two umbrella labor organizations, said it will push ahead with its plan to stage a strike on Wednesday next week.

The KCTU said its members from Seoul, the surrounding Gyeonggi Province and the city of Incheon, west of Seoul, will gather in the capital to hold a massive rally.

The group plans to call for the enhancement of labor rights, such as the abolition of non-regular employment and general revision of labor laws, in a bid to put a spotlight on labor issues ahead of next year's presidential election. 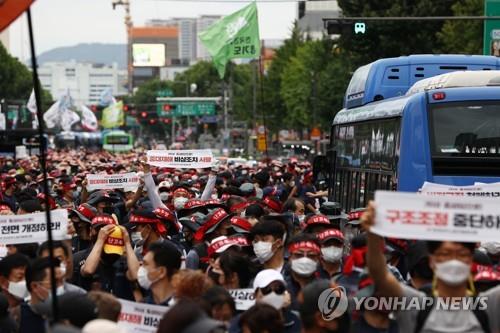 The government has urged the KCTU to refrain from staging a walkout and a rally.

"We have continuously called upon the government to resolve labor issues for workers who suffered the most from COVID-19, but the government tried to muzzle us without giving an answer," the KCTU said, accusing the government of attempting to restrict freedom of assembly guaranteed by the Constitution.

Earlier this week, the Seoul city government said it decided to ban the planned rally. The Seoul Metropolitan Police Agency said it will sternly respond to any illegal acts.