WASHINGTON, Oct. 14 (Yonhap) -- The United States continues to be prepared to meet with North Korea without preconditions as it awaits the North's response to its "specific proposals," a State Department spokesperson said Thursday.

Ned Price also stressed that the U.S. remains actively engaged in diplomacy with its allies to discuss ways to enhance their collective security.

"We do stand prepared to meet with the DPRK without preconditions. We have made, in fact, specific proposals to the DPRK and we will await a response. We will await outreach from the DPRK," the spokesperson said in a daily press briefing. 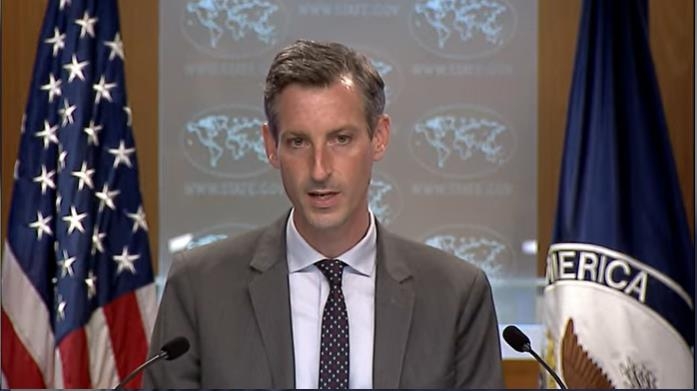 Price did not directly comment on whether the U.S. proposals to the North included the reduction or removal of sanctions on the impoverished North when asked.

Many U.S. officials have noted the U.S. may be prepared to discuss such issues with the North if the reclusive country returns to the dialogue table.

North Korea has stayed away from denuclearization talks with the U.S. since early 2019. It also remains unresponsive to U.S. overtures made by the Biden administration since taking office in January.

"We believe diplomacy, including direct diplomacy with the DPRK, is the most effective means to meet the policy objective that has emerged from a review of our DPRK policy that we completed some months ago, and that objective remains the complete denuclearization of the Korean Peninsula," said price.

The State Department spokesman also said the U.S. was not at a standstill despite its stalled talks with North Korea.

"The threat of DPRK's nuclear weapons and ballistic missile programs, these are threats to collective security that we discuss with partners and allies the world over, and we'll continue to do that," added Price.