SEONGNAM/SEOUL, South Korea, Oct. 15 (Yonhap) -- Prosecutors raided the offices of Seongnam City Hall on Friday, expanding an investigation into a massive development corruption scandal a day after the arrest warrant for a key suspect was rejected.

During the raid, a team of 20 prosecution investigators seized documents and other materials from offices in charge of the 2015 project aimed at developing the Daejang-dong district in Seongnam, south of Seoul, into apartment complexes.

Among the offices subject to the search were a city project team that had been in charge of establishing and authorizing details of the project as well as the network division containing digital data about the city's electronic decision-making process and e-mail communications.

The investigation is aimed at determining how a previously little-known asset firm, Hwacheon Daeyu, and its seven affiliates reaped profits of more than 1,000 times their investments after the firm was selected as a civilian partner for the project.

The raid came a day after the Seoul Central District Court rejected the prosecution's request for an arrest warrant for the firm's owner, Kim Man-bae, on bribery, breach of trust and embezzlement charges, saying there are insufficient grounds for his arrest.

Kim, a former journalist, allegedly colluded with Yoo Dong-gyu, then acting president of Seongnam Development Corp. in charge of the project, to engineer a contract between the two sides to remove a clause limiting the amount of profits that the firm could take from the project.

Yoo has already been arrested.

Prosecutors are zeroing in on the city government to look into whether it was also accountable as the entity with the power to manage and supervise the city development agency.

Gyeonggi Province Gov. Lee Jae-myung, the ruling Democratic Party's presidential nominee, is projected to be ultimately subject to the probe as he was the mayor of Seongnam at that time.

After analyzing the documents seized in the raid, prosecutors plan to first question city officials who oversaw the project. 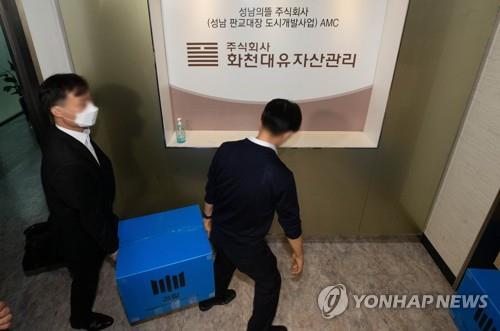