SEOUL, Oct. 17 (Yonhap) -- The local pop culture market has suffered a heavy blow from the protracted COVID-19 pandemic, but the K-pop industry remains less affected thanks to the strongest sales of physical albums in a decade.

The album sold more than 1.22 million copies as of the end of last month, according to data from the local market tracker Gaon Chart.

Three other agencies -- Hybe, SM Entertainment and YG Entertainment -- have already achieved the milestone with albums by BTS and Seventeen, both Hybe artists; EXO, Baekhyun, NCT Dream and NCT 127, all with SM; and BLACKPINK with YG. 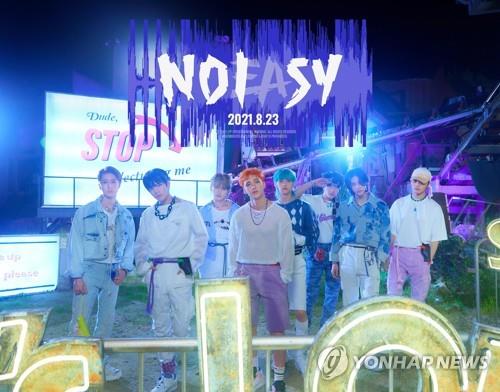 Sales of physical albums have soared conspicuously in recent years.

Industry insiders attribute the robust album sales to limitations from the pandemic, in addition to the global popularity of K-pop supergroup BTS.

"Fans appear to be seeking to assuage the disappointment of not being able to attend concerts due to COVID-19 with album purchases," Kim said. "The pie of the album market became bigger with the growth of the overseas fandom of K-pop music."

According to the trade statistics from the Korea Customs Service, exports of K-pop albums jumped 119.9 percent to US$173.948 million in the first nine months of this year from the same period last year, in a sign of K-pop albums' popularity overseas.

By country, Japan was the largest importer, followed by China, the United States, Indonesia, Taiwan and Thailand.

As their revenue from concerts and fan meet-up events declined drastically, K-pop agencies now appear to be relying more on album sales.

According to the electronic disclosure system of the Financial Supervisory Service, physical and digital album sales took up 44.5 percent of SM's total sales in the first half of this year, up 12.5 percentage points from the same period last year. The rate for JYP also rose 8.5 percentage points to 56.5 percent.

Some in the industry forecast that the annual K-pop album sales, if the current trend continues, could reach 100 million copies this year, but experts say this will also depend on the future situations of the ongoing pandemic.

The government plans to shift to a "living with COVID-19" scheme, in which the virus will be treated as an infectious respiratory disease, like seasonal influenza, with eased distancing, in early November.

"Ahead of the transition to the 'With Corona' scheme, performances are being scheduled one by one from November. In such a situation, the consumption of the fandom, which was focused on album purchases, could be dispersed," Kim said. "Although there is a limitation to expansion with the domestic fandom, the global K-pop market is capable of expanding infinitely. So, a gradual increase is possible even if the annual album sales cannot be guaranteed to reach 100 million copies."