(ATTN: UPDATES throughout with remarks, details, photo)
By Kim Deok-hyun

The two leaders reached the agreement during their first phone call since Kishida took office last week, as they shared a consensus on the need for developing relations between the two countries in a future-oriented manner, according to a statement from Cheong Wa Dae spokesperson Park Kyung-mee.

Relations between South Korea and Japan have been stuck in the force labor row for years since Japan imposed export curbs against the South in 2019 in retaliation against South Korean Supreme Court rulings that Japanese firms should pay compensation to forced labor victims.

Japan has claimed all reparation issues stemming from its 1910-45 colonial occupation of the Korean Peninsula were settled under a 1965 treaty that normalized relations between the two countries, and urged the South to come up with acceptable solutions.

"There are differences in legal interpretations of" the 1965 agreement, Moon was quoted as telling Kishida. "I believe it would be desirable to pursue a diplomatic solution between the two countries and hope to accelerate consultations and communication between diplomatic authorities."

Moon also called for Kishida to find a solution for the sexual enslavement of Korean women by Japan's army during World War II.

According to historians, up to 200,000 women, mostly Koreans, were coerced into sexual servitude in front-line Japanese brothels during World War II, when the Korean Peninsula was a Japanese colony.

Moon and Kishida vowed to cooperate on dealing with North Korea, according to the statement. 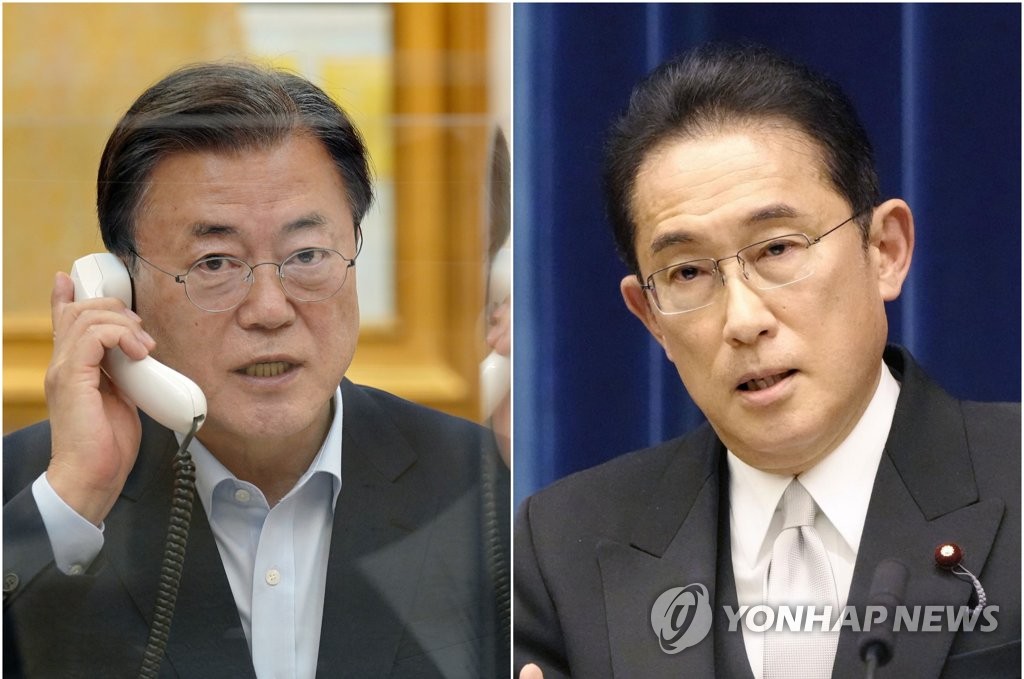 In recent months, Seoul has been pushing to improve bilateral relations at a time when the administration of U.S. President Joe Biden has been seeking to reinforce a regional network of democratic alliances and partnerships to counter China's growing assertiveness.