Speaking during a forum in the eastern city of Chuncheon, Lee said that the Beijing Winter Olympics slated for February next year may offer an opportunity to restore inter-Korean relations.

"(The government) will focus its efforts to resume the Korean Peninsula peace process and make preparations to that end," Lee said during the forum co-hosted by his ministry and the Gangwon Provincial Office.

The minister added, "We hope that through the Beijing Winter Olympics, we can work to find opportunities for the restoration of inter-Korean relations and a 'new leap forward for peace'."

Seoul has been seeking to use the Olympics to reengage with Pyongyang, though the International Olympic Committee (IOC) decided last month to suspend the North from the Beijing Games due to its refusal to join this year's Tokyo Olympics over COVID-19 concerns.

Despite the suspension, the IOC has said that the participation of individual North Korean athletes in the Beijing Olympics will be decided appropriately in the future, should they qualify for the games.

To salvage its peace drive, Seoul has been exploring ways to persuade Pyongyang to return to dialogue, including the provision of humanitarian support and other incentives.

The restoration of inter-Korean communication lines after nearly two months of suspension has raised hopes for a cross-border thaw, though tensions still linger due to a series of North Korean missile launches last month. 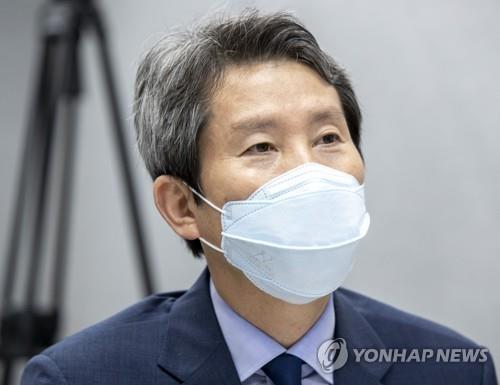