SEOUL, Oct. 17 (Yonhap) -- South Korean military football club Gimcheon Sangmu earned a promotion back to the top-flight K League 1 on Sunday, one season after falling to the second division.

Forward Cho Gue-sung scored the only goal of Gimcheon's 1-0 victory over Bucheon FC at Bucheon Stadium in Bucheon, Gyeonggi Province, and helped the team made up of conscripted footballers clinch the top spot in the K League 2 with two matches to spare. Gimcheon extended their undefeated streak to 14 matches, with 10 wins and four draws. 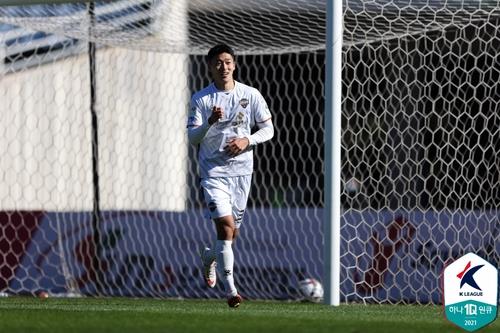 Gimcheon improved to 67 points, 11 better than FC Anyang. Even if Anyang win their remaining three matches, they will still finish at least two points behind Gimcheon.

The North Gyeongsang city of Gimcheon, located some 230 kilometers southeast of Seoul, is the new home for Sangmu. While in the K League 1, the club had been based in another North Gyeongsang town of Sangju until last year. Upon relocation, Sangmu faced automatic relegation to the K League 2.

Each year, the K League 2 champions are automatically promoted to the K League 1 for the following season. Teams ranked second to fourth go through playoffs, with the final winner facing the second-to-last K League 1 team for the promotion/relegation playoff. 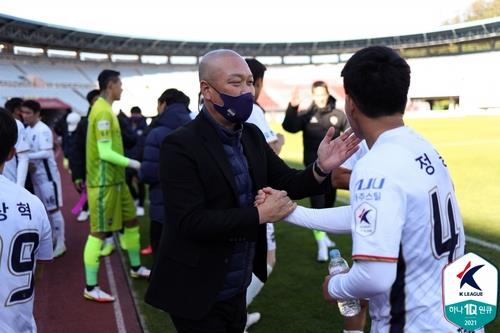 The last-place team from the K League 1 will be relegated to the second division for 2022.

Cho broke the ice a dozen minutes into the second half, converting a cross from Myung Jun-jae for his sixth goal of the season.

Gimcheon had a call wiped out following a video review in the 80th minute, as Cho was ruled to have committed a foul just before Oh Hyeon-gyu found the back of the net.

But it didn't ultimately matter as Gimcheon held on for the narrow victory. 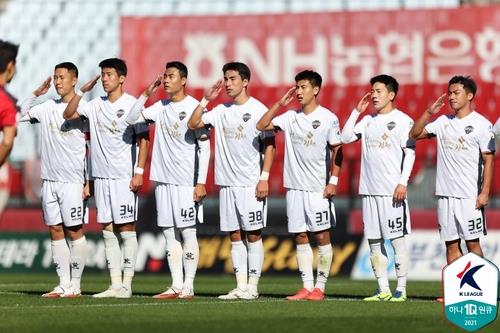 Healthy South Korean men must serve in the armed forces, and K League players who aren't otherwise exempt -- via Asian Games gold medals or Olympic medals of any color -- are allowed to complete their obligation by joining Sangmu.

The talent level for Sangmu varies season to season, and the 2021 squad has been particularly deep. The current rosters feature four members of the most recent senior national team. Four other players have recently been called up for the under-23 national team.

Other South Korean internationals such as Moon Seon-min and Kwon Kyung-won were only recently discharged from the military.

Gimcheon are leading the K League 2 with 55 goals after 34 matches and have conceded the second-fewest goals with 31.