WASHINGTON, Oct. 17 (Yonhap) -- South Korea plans to decide whether to join a mega Asia-Pacific free trade agreement involving 11 nations as early as this month in an effort to diversify its export portfolio, the country's finance minister has said.

Finance Minister Hong Nam-ki made the remarks during his meeting with reporters Thursday (local time) in Washington, D.C. after attending the Group of 20 meeting of finance ministers and central bank governors.

South Korea has been "actively" reviewing the joining of the Comprehensive and Progressive Agreement for Trans-Pacific Partnership (CPTPP) this year as part of its efforts to expand mega FTAs in the Asia-Pacific region.

The CPTPP -- the renegotiated version of the Trans-Pacific Partnership (TPP) -- was launched in December 2018 after then U.S. President Donald Trump withdrew from it in 2017. The Joe Biden administration is known to be reviewing rejoining the trade deal.

Hong said South Korea is likely to decide whether to join the CPTPP as early as next week.

"We may have to make a decision by the end of this month or early November. We are in the final stretch," Hong said.

The TPP has been long seen as a key counterweight to China's growing clout. But in a surprising move, China submitted an application in September to accede to the CPTPP. Taiwan also followed suit.

A planned change in the chair of the CPTPP could be another key factor for South Korea's decision, he said.

Singapore will assume the chair next year after Japan, which has long been reluctant to South Korea's joining apparently due to Seoul's ban on Fukushima seafood.

Since 2013, South Korea has banned all seafood imports from eight Japanese prefectures near Fukushima on concerns over their radiation levels in the wake of the 2011 Fukushima nuclear power plant meltdown.

The trade deal looks significant as it will support South Korea's efforts to lower trade barriers amid protectionism sparked by a trade row between the United States and China, coupled with Seoul-Tokyo trade frictions. 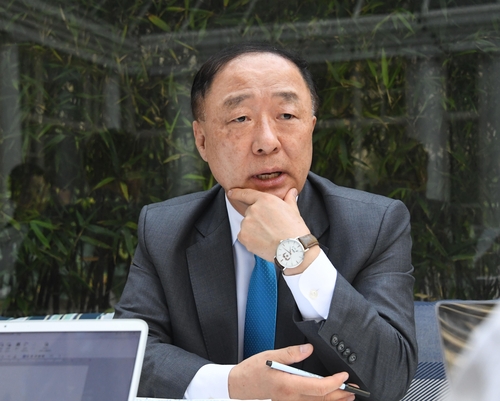