SEOUL, Oct. 18 (Yonhap) -- The intelligence chiefs of South Korea, the United States and Japan will meet in Seoul on Monday behind closed doors for talks on North Korea and other pending issues, according to a source.

The three will meet for the first time since May in Tokyo and are expected to share the assessments of the security situations on the Korean Peninsula, following Pyongyang's recent series of missile launches.

The top spy agency officials may also touch on South Korean President Moon Jae-in's recent proposal to declare a formal end to the 1950-53 Korean War as Seoul ramps up diplomacy to revitalize its drive for lasting peace on the peninsula.

The chief nuclear envoys of the three regional powers are scheduled to meet in Washington on Tuesday (local time).

The talks could also consider ways to strengthen trilateral intelligence sharing, as the leaders of the two East Asian countries attempt to patch up rocky relations over historic disputes stemming from Japan's colonial rule of the Korean Peninsula from 1910-45. 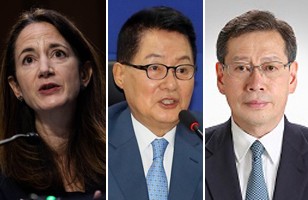