SEOUL, Oct. 18 (Yonhap) -- President Moon Jae-in on Monday urged an umbrella labor union to refrain from waging a large-scale strike planned for this week, saying that such a move could make it more difficult for health authorities to slow the spread of COVID-19.

Moon made the remarks at a regular meeting with Prime Minister Kim Boo-kyum earlier in the day as the Korean Confederation of Trade Unions (KCTU), the more militant of the country's two umbrella labor organizations, has pledged to go ahead with a nationwide walkout and protest rallies on Wednesday.

The nationwide walkout aims to bring labor issues to the fore in the runup to the 2022 presidential election, and the KCTU is seeking to bring together as many as 550,000 striking workers to the events. 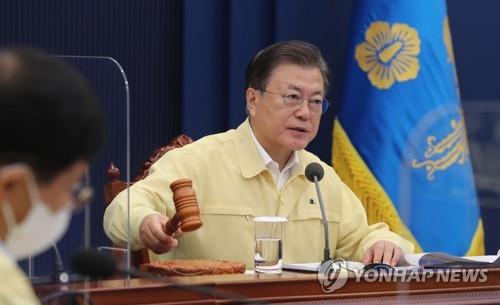 Kim told Moon that the government will make last-minute efforts to persuade the KCTU to refrain from waging a large-scale strike.

Police and the city government of Seoul have repeatedly warned such big gatherings are in violation of the infectious disease prevention act and they will respond sternly if such gatherings are held.