Kim's trip to Seoul will follow his meeting with his South Korean and Japanese counterparts, Noh Kyu-duk and Takehiro Funakoshi, respectively, here in Washington this week.

"Special Representative Noh and I also discussed the end of war proposal, and I look forward to continuing those discussions and other issues of mutual concern when I'm in Seoul later this week," the U.S. diplomat said of his meeting with Noh at the State Department.

"Special Representative Noh and I had an excellent meeting this afternoon in advance of tomorrow's trilateral meeting with Japanese Director-General Funakoshi," he added. 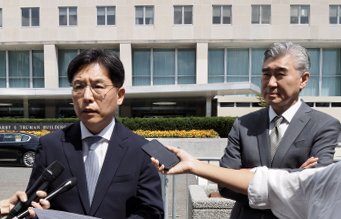 South Korean President Moon Jae-in proposed declaring a formal end to the Korean War during the U.N. General Assembly in New York last month as a way of bringing North Korea back to the dialogue table and resuming its denuclearization process.

The South Korean and U.S. nuclear envoys last met at the end of last month in Jakarta, where Kim is concurrently serving as U.S. ambassador.

North Korea remains unresponsive to U.S. overtures for dialogue and has stayed away from denuclearization talks with the U.S. since 2019.

Noh said he and Kim discussed ways to build trust with North Korea.

"(We) discussed various ways of engagement, such as humanitarian assistance for the North and other trust-building measures to help quickly restart dialogue and diplomacy," the South Korean official said in a joint press event with his U.S. counterpart.

"The U.S. continues to reach out to Pyongyang to restart dialogue. Our intent remains the same. We harbor no hostile intent towards the DPRK, and we are open to meetings without preconditions," he said, referring to North Korea by its official name, the Democratic People's Republic of Korea.

"We are prepared to work cooperatively with the DPRK to address areas of humanitarian concern. The U.S. supports the provision of humanitarian aid, consistent with international standards for access and monitoring, to the most vulnerable," Kim added.

Still, the U.S. special representative emphasized the need to maintain international pressure on the North.

"Even as we remain open to dialogue, we also have a responsibility to implement the U.N. Security Council resolutions addressing the DPRK," he said.

"Furthermore, consistent with the Biden-Harris administration's focus on human rights, we will continue to advocate for the human rights of the North Korean people and call for an immediate resolution of the abduction issue," he added, referring to the issue of Japanese nationals believed to have been abducted by the North.