The septet was included in a star-studded lineup for the L.A. show scheduled for Dec. 3, the iHeartRadio, the country's largest online radio platform, announced on its website and social media.

The South Korean band will open the show performing its mega-hit songs "Dynamite" and "Butter," it added. 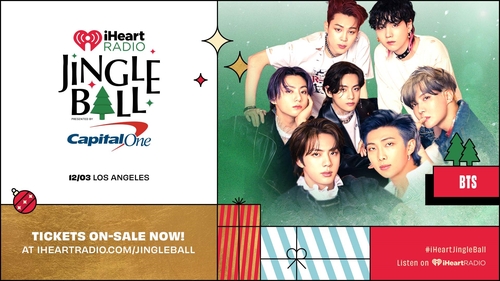 BTS took part in the annual music festival in 2019 and an online version of the event last year due to the new coronavirus pandemic.

This year's Jingle Ball Tour will kick off in Dallas on Nov. 30 and continue in Los Angeles, Minneapolis, Philadelphia, New York, Boston, Washington, D.C., Chicago, Atlanta and Miami until Dec. 19.

Also in L.A., BTS is scheduled to throw its first in-person concerts in two years.