SEOUL, Oct. 19 (Yonhap) -- Police said Tuesday they have referred rapper NO:EL to the prosecution after arresting him on charges of driving without a license, refusing a breathalyzer test and headbutting a police officer.

The incident took place on the night of Sept. 18 when the 21-year-old rapper, whose real name is Chang Yong-jun, caused a fender bender while driving his Mercedes in southern Seoul. His driver's license was revoked at the time.

Police sent to the scene asked Chang to take a breathalyzer test, but he refused and headbutted the police officer, according to investigators. 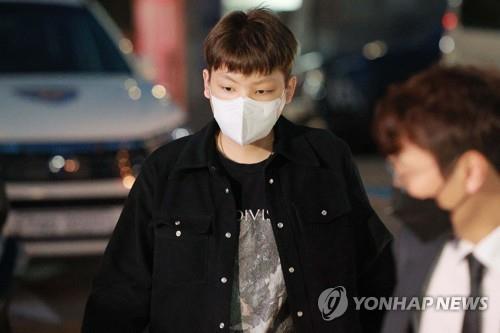 Last week, he was arrested as a court issued a warrant for his arrest.

The law, revised in 2018 to strengthen punishment for DUI offenses, mandates imprisonment of two to five years or a fine of 10 million won (US$8,450) to 20 million won for those who are caught drunk driving or refuse to take a breathalyzer test twice or more.

Chang was previously sentenced to 1 1/2 years in prison, suspended for two years, in 2020 for causing a car accident while driving under the influence of alcohol the previous year.