SEOUL, Oct. 19 (Yonhap) -- South Korean stocks rebounded Tuesday on easing concerns about the new coronavirus and the volatility in the currency market. The Korean won rose against the U.S. dollar.

Trading volume was moderate at about 833 million shares worth some 10 trillion won (US$8.5 billion), with gainers outnumbering losers 449 to 381. 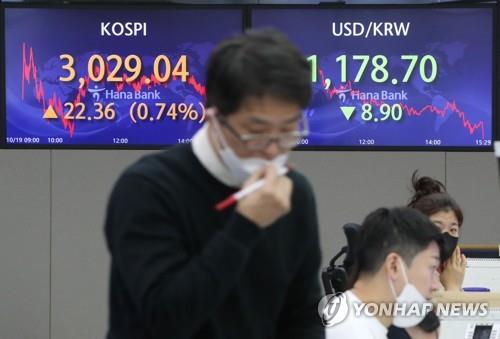 Stocks got off to a strong start on overnight gains on Wall Street and easing virus woes.

"The local stock market seems to have shrugged off some of the negative factors at home and overseas, such as inflation and tapering jitters," Mirae Asset Securities analyst Park Gwang-nam said.

"The FX market has also seemed to be stabilizing, and investors' appetite for risky assets has increased in general, leading to today's stock rebound," he added.

The local currency closed at 1,178.7 won against the U.S. dollar, up 8.9 won from the previous session's close.

The government has been considering lowering the level of distancing rules, currently at its highest, should virus cases stay low.

Bond prices, which move inversely to yields, closed higher. The yield on three-year Treasurys lost 0.9 basis point to 1.866 percent, and the return on the benchmark five-year government bond fell 3.6 basis points to 2.134 percent.