The combined net profit forecast for 168 major listed firms came to 29.7 trillion won (US$25.2 billion) for the July-September period as of Tuesday, up 4.3 percent from a year earlier, according to financial information provider FnGuide.

Yet, it represents a 34 percent plunge from their estimate of 44.9 trillion won made a month earlier.

The businesses cover those for which three or more local securities companies have put forward their forecasts for third-quarter net income.

Their operating income projection has also been revised down. The companies are predicted to post a combined operating profit of 58.75 trillion won for the three-month period, up 50.1 percent from a year earlier. 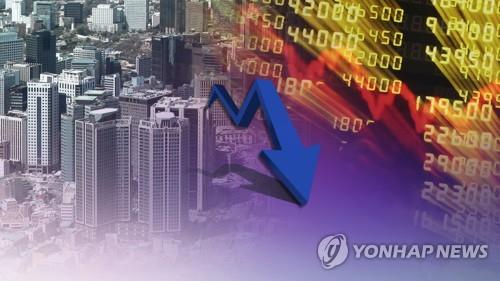 It is also down 0.1 percent from their outlook of 58.83 trillion won presented a month earlier.

But their sales forecast has been revised up 0.1 percent to 508.2 trillion won from 507.6 trillion won over the cited period.

Brokerages' downgrades come amid concerns that growing inflation will likely result in rising costs for local companies, which will in turn weigh on their performances.

In its earnings guidance, the South Korean tech giant estimated its operating profit at 15.8 trillion won for the quarter. It was the company's second-largest quarterly figure but down slightly from a market consensus.

Last week, LG Electronics Inc. estimated its third-quarter operating profit to drop nearly by half from a year earlier largely due to a recall provision cost.

Leading steelmaker POSCO, however, estimated its third-quarter operating profit at 3.11 trillion won for the third quarter, up a whopping 364.2 percent from a year earlier.

However, they have downgraded operating income estimates for Hyundai Motor, SK Innovation and Hotel Shilla from a month earlier.
(END)