During a meeting with security experts in Seoul, Curtis Scaparrotti, who led the USFK from 2013-2016, stressed the "complex" issue of the declaration should be discussed in a "careful" way, as tensions flared anew with the North's test this week of a new submarine-launched ballistic missile (SLBM).

Addressing an annual U.N. General Assembly session in New York last month, President Moon Jae-in renewed his proposal for the declaration, which Seoul officials have cast as an effective confidence-building measure with the North.

"We, sometimes, forget to go back and think about the threat that this alliance was formed to counter. That won't change the day after the declaration of the end of the war," Scaparrotti said at the meeting hosted by the Korea-U.S. Alliance Foundation and Korea Defense Veterans Association.

"It will still be present in the same way, in the same place most likely, and our responsibility as an alliance is to defend the Republic Korea and the people here," added the former commander who also led the U.N. Command (UNC) and the South Korea-U.S. Combined Forces Command during his stint as the USFK chief. 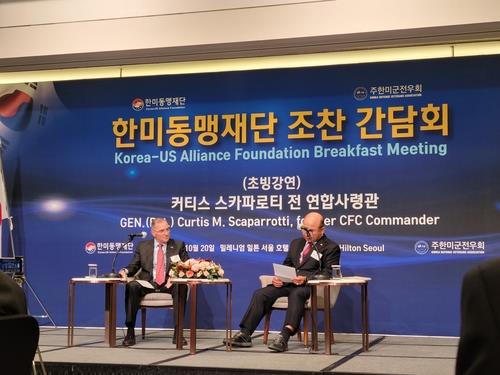 Commenting on the North's launch on Tuesday of the SLBM, Scaparrotti said it poses "another problem" to the South Korea-U.S. alliance.

"That is a problem with a country that's irresponsible with these missiles and the nuclear capability its developed and certainly, it poses another problem to the alliance," the former commander said.

"A submarine-launched capability is another threat to the alliance and one that we have to make adjustments and that we have to now consider in terms of the defense of the Republic of Korea," he added, referring to South Korea's official name.

The proposal for the end-of-war declaration has stirred up a debate in Seoul and Washington.

Some say the declaration would pave the way for full-fledged efforts to foster lasting peace on the Korean Peninsula, while others warn that it could eventually lead to the dissolution of the UNC, an enforcer of the armistice that halted the war.

The issue was a key agenda item when Seoul's chief nuclear envoy, Noh Kyu-duk, and his U.S. and Japanese counterparts, Sung Kim and Takehiro Funakoshi, respectively -- met in Washington earlier this week to explore measures to incentivize the North to return to dialogue.