Trading volume was moderate at about 668 million shares worth some 11 trillion won (US$9.4 billion), with losers outnumbering gainers 521 to 337. 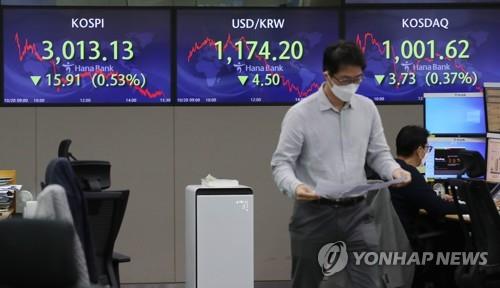 The key stock index got off to a solid start on overnight gains on Wall Street but turned to losses amid institutional selling.

"Investors' expectations about the stock performance seem to have come under adjustment, (leading to the institutional sell-offs)," said Bookook Securities analyst Lee Won.

South Korea's new virus cases stayed below 2,000 for the 12th consecutive day Wednesday amid the rising rate of vaccinations.

As of Wednesday, 66.7 percent of the 52 million population was fully vaccinated, and 78.9 percent had received a first shot.

The local currency closed at 1,174.2 won against the U.S. dollar, up 4.5 won from the previous session's close.

Bond prices, which move inversely to yields, closed mixed. The yield on three-year Treasurys lost 1.9 basis points to 1.847 percent, while the return on the benchmark five-year government bond added 1.2 basis points to 2.146 percent.