SEOUL, Oct. 20 (Yonhap) -- The military will seek to appeal a recent court ruling in favor of a deceased transgender soldier who had filed a suit over its decision to discharge her against her will, a defense ministry official said Wednesday.

In a landmark ruling earlier this month, the Daejeon District Court judged it was unfair for the military to discharge Byun Hee-soo, formerly a staff sergeant in her 20s, over her gender reassignment surgery in 2019.

Byun underwent the surgery in Thailand in 2019, two years after voluntarily enlisting, and expressed her desire to keep serving in the military as a female soldier. But the Army decided to compulsorily discharge her in January last year.

In March this year, she was found dead in an apparent suicide.

On Wednesday, a defense ministry official told reporters on the condition of customary anonymity the Army has decided to appeal the ruling and request the justice ministry make a judgment on its plan.

By law, the justice ministry is responsible for overseeing suits pursued by the state.

The official said although the military respects the court ruling, it believes there is a need for a higher court to review the case.

"The defense ministry will thoroughly examine whether transgender people can serve in the military through policy research in consideration of the unique nature of the military and public opinion," the official said. 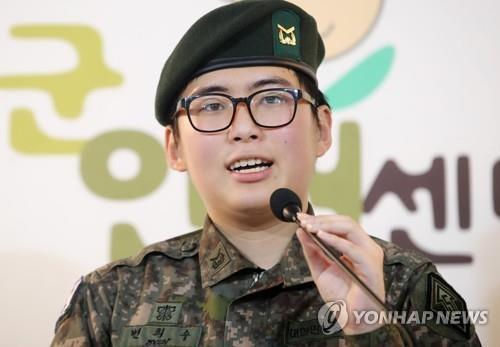