Her remarks come after North Korea announced a successful test launch of a submarine-launched ballistic missile (SLBM) that some believe may be a "game changer."

"(It has) consistently been our view. So we've stated our openness to having those discussions with North Korea for months now," Psaki said in a press briefing onboard the Air Force One en route to Pennsylvania where President Joe Biden was later scheduled to deliver a speech on his economic agenda. 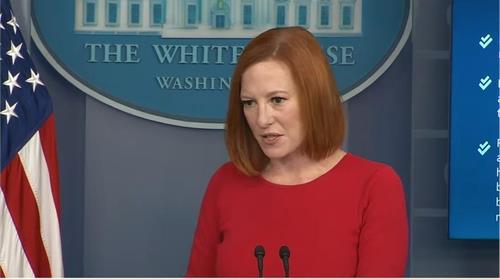 North Korea on Wednesday (Seoul time) reported that it has successfully test fired a new SLBM the day before.

SLBMs are considered to reflect an increased threat to the U.S. as they may require less distance to reach the mainland U.S.

Many, however, believe North Korean SLBMs do not pose an immediate threat to the U.S. as the impoverished North is said to have only outdated, diesel-powered submarines that are easily detected.

The U.S. Indo-Pacific Command earlier said the latest North Korean missile did not pose an immediate threat to U.S. personnel or territory.

Tuesday's missile launch marked the eighth known missile test by the North this year. The country also test launched what it claims to be a new hypersonic missile late last month.

The U.S. has repeatedly condemned North Korea's missile tests, but said it remains committed to engaging with the North in dialogue and diplomacy.

Pyongyang has maintained a self-imposed moratorium on nuclear and long-range missile tests since late 2017.