DONGHAE, South Korea, Oct. 21 (Yonhap) -- One crew member was found dead and two others were rescued Thursday after a fishing boat capsized in waters near South Korea's easternmost islets of Dokdo a day earlier, the Coast Guard said.

Six people remained unaccounted for after the 72-ton vessel capsized in waters 168 kilometers northeast of Dokdo at around 11:p.m. Tuesday as officials stepped up search and rescue operations, including sending 14 divers into the capsized boat.

The accident was initially reported to have taken place Wednesday afternoon, but the Coast Guard later corrected the information after questioning the rescued.

Earlier in the morning, a private fishing vessel found two Chinese crew members conscious and adrift near the area. They were airlifted by helicopter and rushed to a hospital on the island of Ulleung for treatment, officials said.

According to one of the rescued crewmen, their ship turned upside down after high waves hit it that night.

"Seven of the nine crew members evacuated onto the sea. Five of the evacuees were holding onto buoys, with only three wearing life-saving tubes and not the other two," the Coast Guard quoted the crewman as saying.

The captain and the chief engineer remained aboard the ship at the moment the others fled, he said.

The Coast Guard has been searching the area, mobilizing six patrol and private ships, and four aircrafts. 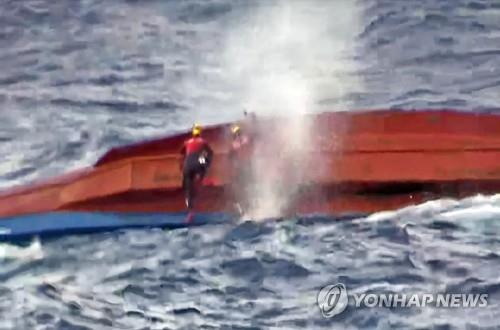